"Oh I was listenin' to some Schoenberg..." may not be the best way to start off a blues song, but it reminded me of listening to some of Schoenberg’s “neo-classic serial” pieces like the 4th String Quartet with its Mozartean rhythms and starting an argument over the point of writing serial music still using “tonal rhythms” – since rhythms do not exhibit properties of tonality, what was I trying to imply? Well, basically that it’s the basic rhythmic fingerprints we associate with tonal music: if non-tonal music uses other surface elements of tonal music, doesn’t this create a kind of stylistic dissonance? One composer friend said “good point,” and another, a theorist, said under his breath something like “idiot.”

Novelists tell their students to “write what you know.” Composers, who as a rule were rarely given that same advice, have had access to a lot of different kinds of music, often “knowing” music that would not be considered classical. Just as composers in the 19th Century became inspired by folk-music, composers in the 1920s were inspired by jazz. When I was at Eastman, I don’t remember hearing too many composers influenced by rock music: that was not serious enough. I’m not even sure that many of us listened to it: jazz, certainly, but I don’t remember many evenings sitting around waxing euphoric about the merits of 1970s rock’n’roll.

My own musical tastes generally lie on the classical side of the spectrum. When I was playing a round of that once-popular game called “Trivial Pursuit: the Baby Boomer Edition,” I was appalled to find out 99% of the music questions that were coming up – aside from the one about Heifetz – were all about rock songs and performers. And that two classical musicians in the group could actually quote the fourth line of the third verse of some song by a group I’d never even heard of. What planet did I grow up on?

Anyway, listening to what’s going around me (“because it’s there” and virtually inescapable), I became aware how many times and in how many different contexts I was hearing this one persistent rhythm:

(It should probably be in 2/4 and I’m only indicating register rather than pitch, since it’s more of a percussive thing, anyway, but that’s basically it).

I’m sitting quietly in my living room when I hear it as some mobile boom-box serenades my street passing through long past midnight. On a sunny summer afternoon, the walls reverberate to it as my next-door neighbor fires up the sound-system (then fortunately turns the volume down). It’s in the background of commercials, it’s all over the urban soundscape. I cracked up when I was listening to the title song from Sondheim’s “Sunday in the Park with George,” in the razzle-dazzle spit-em-out lines, “well there are worse - things - than staring-at-the-water on a Sunnn-daaaay” (which is continually added to with more lines full of breathless 16th-notes) and there it was, in the orchestra. Boom! Chick-a-boom-boom chick!

But Sondheim got me to thinking: rather than being annoyed with it as I often am when I hear it in other contexts, this time I was smiling and my head was twitching to the rhythms. As predicted, it became the next day’s ear-worm and I found myself trying to figure out what to do about it.

Thinking back to Schoenberg writing a Mozartean string quartet, I wondered what it would sound like if I tried writing rock with my own harmonic language, using all 12 notes? Well, I found if I took these two hexachords

and used the first six notes (which Forte labels 6-Z3, inverted) for the first two chords, then took the other six notes (6-Z36, its complement) for the throw-away 16th note between the chords, what I had left over was a pattern of four notes spelling out the musical signature of Dmitri Shostakovich – D-S-C-H or D, E-flat, C and B-natural (using German note-names and spelling his last name with the German phonetic equivalent of the SH). Well, I cracked up on any number of accounts, here: it’s the Shostakovich Centennial, first of all, and John Clare’s been using the D-S-C-H motive as his ring tone, so it seemed a perfect fit: that became the violin part.

After all, this movement is going to be the “scherzo” (which is Italian for “joke”), so why not actually take it at face value?

So out of this, I got a one-measure pattern. Since I want it to grow into a progression rather than just sit there and go “boom-chick-a-boom-boom chick” forever, I wondered what else I could do with that. I looked for some transposition of the hexachord where I could still find the D-S-C-H motive (which also exists in the initial set of six notes) and I came up with a slightly different pattern but with the placement of the two hexachords switched. This produced chords built out of slightly different intervals and compressed its register. Now I have these two patterns. 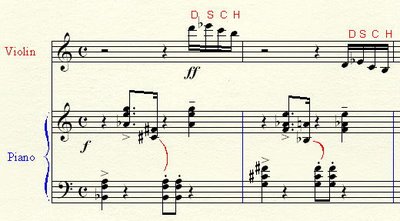 (Extra geekpoints to the ones who might have recognized 6-Z3/Z36 as the same hexachord for the harmonization of the open-strings motive in Example 7 from the Theme & Variations: it’s a closely related hexachord to the primary 6-Z25/Z47 hexachord, not just any old collection of pitches chosen at random.)

This is for the B-Section, but the problem was how to get there. There were various things I could do for the A-Section but nothing seemed to be suitable. It was either too fast, too virtuosic (hey, I have to be able to play this, myself) and above all too much the same high-energy level.

Then, as I mentioned in a previous post, my upstairs neighbor was playing his radio a little louder than usual one morning, some blues song, sweet and mellow. Then suddenly, erupting from next door, a blast of that “it’s-everywhere” rock rhythm – just a measure of it, then cutting out. Several seconds later, it cut in again, totally unrelated in key, rhythm or tempo to the blues song. Charles Ives would’ve been thrilled. That was when I got the idea to start the movement with a kind of bluesy ballad, then at one point the piano just starts flailing away with one measure of this rhythm, like “oops sorry, counted wrong, came in early” but then tries again a bit later before the violin just joins in and they let it rip.

That’s when I realized, looking at the hexachord (6-Z25/47) from the Theme & Variations, if I take the six-note set that gave me the first “open-string motive” and invert it

it becomes a blues scale – hmmm: well, if you start on D, actually, it is. Now, I’m not a frequent listener of jazz or blues, though I enjoy it (more than I can say for most rock music) nor am I conversant with its technical details: my intention is not to try to imitate blues or write real jazz (or for that matter, copy the Blues movement from Ravel’s Violin Sonata), but it seems kind of an appropriate gesture considering the violinist I’m writing it for enjoys playing folk music and blues with friends on a night out (but no, I don’t want to write for his pink electric violin).

Not so much as a sketch, then, but just an example of what I might be able to do with this idea, here’s a mock-bluesy line (the upper melody) which I thought I’d try “harmonizing” (my way) with the complement hexachord.

Then, for a second idea, a kind of standard blues cadence...

True, Schoenberg wasn't trying to imitate Mozart's melodic and harmonic language using his serial techniques, but I find it interesting, given the pitch material I accidentally chose, that in this case I can - and some of it doesn't sound all that far-out (to me): not very good, maybe, but not all that far-out.

It’s a chilly autumn morning, the neighborhood is quiet (the houndentenor isn’t singing the blues this morning, either) and I’m going to hear the Billy Joel Piano Concerto tonight: I’m not ready to cross over just yet, personally, but it is time to get some work done.
Posted by Dick Strawser at 11:06 AM