From Draft to Sketch to... You

The morning was spent not so much trying to figure out my sketches for the first of these violin & piano pieces, but trying to figure out how to realize them into this NotePad version of Finale: true, it’s only meant for simple things – for instance, even as an example, it won’t let me write in 7/8 – but even just to hack out the first 20 measures of the Theme, it’ll give you an idea how it’s going.

So this is the first time I’ve published a real piece of my music on the web! (If you're hoping for audio, even in standard midi-ocrity, luddites move slowly when exposed to new forms of technology... give me time...)

Part of the problem I seem to be having with the notation software - beyond getting it all down in black-and-white - is consistency with triplets (especially on the 4th beat – argh!), but basically this is close to what I would be writing if I had the greater speed and flexibility of a paleopathetic pencil on premodern paper. That is, if my cat Murphy wasn't doing her Lassie impersonation ("what's the matter, Murphy, did Timmy fall down the well?")... It annoys me that it won't indicate a C-natural when there's a C-sharp up to a C-natural in another register, or that a G-sharp in the beat before a bar-line really becomes G-natural after it, but without it, it looks like it could still be a G-sharp, without the cancellation to prove it's not a mistake (fine in Mozart; hell in Schoenberg). But until I figure out certain details about printers and manscuript paper (can I find a printer that will handle the 12"x18" 30-stave paper I need for the Symphony?) as well as various other not-quite-FAQs, this is pretty much a WYSIWYG score...

The tempo is slow – 1/4 note = 60 – and it should be played flexibly and expressively. There are some bowing and phrasing things I need to work out for the violin and I can’t really work on the piano part AT the piano which is in a different room than the computer, of course, but short of some phrasings and pedal marks, that’s the idea of it, anyway. 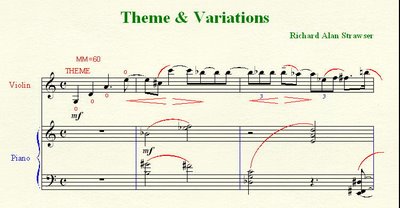 From there, it moves into the First Variation... but that’s the work-load for today: now it’s time to head into the station. A beautiful fall day and it was a sacrifice to spend it cooped up on my computer getting this much done, but artists are made to suffer (and that's even before the premiere...).
Posted by Dick Strawser at 1:13 PM