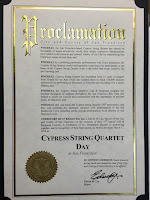 Who: The Cypress Quartet
What: Beethoven's Op. 18/1 and Op.59/3 (The Third “Razumovsky”) with some of the Novelettes by Glazunov in between

When: Thursday, March 17th at 7:30
Where: Lutz Hall of Lebanon Valley College in Annville, PA

March 11th in San Francisco was officially Cypress String Quartet Day, proclaimed by the mayor's office, in honor of their 17th Annual Call-and-Response program in what will be their final season.

Like all good things, there comes a time, and the quartet has decided to disband at the end of this season with a final concert on June 26th.

That makes this appearance at Lebanon Valley College, part of their residency there, the last time Central PA gets to hear them live, almost 20 years after they first played there as part of the first Next Generation Festival which Ellen Hughes, then host of “Desert Island Discs,” an on-air host and producer at WITF, founded with pianist Awadagin Pratt.

I remember that first season when Awadagin and several of his fellow musicians played concerts across the region – I heard the one at the Rose Lehrman Center at HACC – and the quartet played Beethoven's Quartet, Op. 132, then joined Pratt for the Brahms Piano Quintet. I was amazed at their interpretation of the Beethoven, especially – how young people in the audience who probably never heard classical music live before sat in rapt attention, even (especially) during the famous “Heilige Dankgesang” that is the long, often challenging slow movement and which often challenges the attention span of seasoned adults in the audience. I was amazed to find out the group was brand new, not a year old, yet, and yet they played with a sense of musical empathy groups that have been together for decades would be lucky to have – especially with Late-Beethoven!

Things haven't changed much in those two decades since – except for a new violist a few years later and Tom shaved his beard. They've made several return appearances to the region with the help of Ellen Hughes' championing, and other presenters soon following suit. And not just bringing them in for a single concert on a series – there were residencies and frequent, often annual, returns, creating something of a second (or third) home for the quartet here. There were years I thought I had a subscription to their season, I would see them three or four times.
= = = = =

And now they're making a sort of farewell round.

Last year was also a difficult farewell when Ellen died in June, a friend and colleague to many and an indefatigable supporter of the arts – all the arts, not just music – who, after leaving her desert island behind her, went on to write a regular-ish column for the Harrisburg Patriot-News where her interviews and insights into the performers attracted audiences to concerts, plays, exhibits and events across the region. In her few years as director of Market Square Concerts, she continued bringing performers to the area with an adventuresome sense in programming and educational out-reach.

The Cypress' program on Thursday, fittingly, is dedicated to the memory of Ellen Hughes. They called her a “fairy godmother” who was a mentor, adviser, admirer and even one of their board members. They have a long history together and I know how much Ellen appreciated the quartet and enjoyed their performances, their recordings and above all their friendship, something not always found in the music business.

As they say at the end of the press release, “The Cypress Quartet’s decision [to disband] comes after a great deal of reflection and discussion, and the quartet agrees that it is the right time for them to move on to explore new artistic territories as individuals. The members of the quartet are deeply grateful to vast numbers of fans, donors, fellow musicians, and presenters for all of their support of the Cypress Quartet.”

I hope you'll be able to join the Lebanon Valley College audience for one more chance to hear great music-making with this great quartet playing great music – and to take the chance to thank them (and Ellen, too) for having been there all these years.

As part of their "Call & Response" series, the quartet commissions a work by a young composer to find a connection between traditional repertoire on the program and a new work they compose specifically for the Cypress Quartet. Here is Ellen Hughes interviewing composer Dan Coleman in 2000, writing a work connected to great quartets by Mozart and Beethoven and what it's like working with the Cypress Quartet.

Sixteen years later, Dan Coleman was also the composer for their last "Call & Response" series, with this photo taken on March 11th, 2016, in San Francisco.

Their recording-set of the Complete Beethoven Quartets will be released by Avie Records this coming May.

While I would normally write something about the music they'll be performing, I can't compete with the “liner notes” that were written by none other than Joseph Kerman who, as they say, wrote the book on Beethoven Quartets, first published in 1966.

But here are links if you want to read a little bit [sic] more about the quartet and the music on the program:
...Beethoven's “Razumovsky” Quartets
...Glazunov and his “Novelettes” (keep in mind this post is for a 2010 performance in Lancaster)
...The Cypress Quartet at Lebanon Valley in 2008 (about the quartet but also a review of their Debussy performance that night)
...their first Beethoven CD – Op.131 & Op.135

At the end of this review, I wrote, “I'm also looking forward, hopefully, to hearing them perform and maybe re-record them a decade or so from now: it would be fascinating to hear how their perceptions change and mature with them.”

Oh, well...as Beethoven himself asked at the beginning of his last quartet's last movement, Muss es sein? Must it be?

The answer he gives (at 1:14 in the clip below) is Es muss sein! It must be. But at least "it must be" with joy and gladness for the times we've shared and moving on into the future with affirmation.
= = = = =

= = = = = = = = =
photos lovingly ransacked from the Facebook pages of the Cypress Quartet and Jennifer Kloetzel; videos courtesy of the quartet's website, with more available on YouTube.
Posted by Dick Strawser at 10:26 AM