Getting Back on the Bike 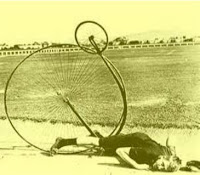 The funny thing is, as often as I've heard that expression about "getting back on the bike," I never actually learned to ride a bike...

When I started this blog years ago and called it “Thoughts on a Train” (without apologies to Samuel L. Jackson and a lively bunch of snakes), the intention was to write about a variety of things that caught my imagination, most likely about music – but I didn't want to give it a “musical” title since it would be more than just music.

Instead, I've hardly been writing here at all... and spending far too much time on Facebook, it seems, but that's another topic.

As a composer, I thought it would give me a chance to explore different aspects of music and creativity – the “how a composer works” kind of approach – but then gradually I began to compose less and finally, now, not at all. Once I was “laid off” in 2008, I found I had lots of time to compose and I did that regularly, finishing a Violin Sonata, writing two song cycles (one with orchestra, one with piano), a couple of short choral pieces, and starting a number of other works, large and small, chamber music or orchestral, all quickly abandoned.

When NaNoWriMo rolled around again – National Novel Writing Month in which would-be authors try to write 50,000 words of a novel in November – I decided now I had the time to focus on it, so I started doing that every year and making my goal if not always finishing the novel after the month was over.

While I was still employed, I'd started a musical parody of the opening scene of Dan Brown's best-selling thriller, The Da Vinci Code and enjoyed the process so much, though I hadn't read the book yet, I ended up doing a parody of the whole book which became The Schoenberg Code and which is still posted here on the blog in a revised version reworked in the months following my suddenly finding myself with so much free time.

It seemed logical then that I should do a parody of Brown's next thriller, The Last Symbol which became The Lost Chord. By the time I'd finished and posted that, I thought “you know, I could probably write one of my own,” so then I began what is a parody of the genre itself which I called The Doomsday Symphony. Some of the characters are Gustav Mahler, composer of a symphony that is stolen and which has potentially catastrophic consequences if it's performed on December 21st, 2012 (remember the Mayan Apocalypse?) and Beethoven and Mozart as a child - and involved time travel and a dastardly plot to kill the Great (though already dead) Composers.

You can read the novel in its entirety, here.

In the process, I had written what I describe as a “classical music appreciation comedy/thriller.” I'm not so sure it's a true parody (not of any one thing specifically) since so many thrillers I've read as “research” seem to be “parodies of the genre” already.

This, then, led to the inevitable sequel – well, not so much a sequel as the next in a series: I have this hero, a “classical music detective (by default)” named Dr. T. Richard Kerr (after the musical term, ricercar which comes from the Latin “to search”) and his sidekick, a young student assistant named Cameron Pierce (who remains the only major character in my novels whose name is not a pun) and a villain named Klavdia Klangfarben. Her name was chosen for euphonious reasons, “klangfarben” being the German term to describe a melody created through pointillistic orchestration in which “sound colors” create a varied... oh well, anyway, it's complicated but I liked the sound of the word and for some reason it always struck me as being “ominous.” (And Klavdia rather than Claudia, not necessarily as a bow to the only other Klavdia I can think of, the love-interest of one Hans Castorp in Thomas Mann's Magic Mountain, Klavdia Chauchat.)

And there was the evil organization SHMRG which sounded like something evil straight out of James Bond. In reality, it's an acronym for a music teacher's way of discussing the elements of music as you listen to them, either by focusing on one element at a time or hearing something first that you then place into one of the elements' categories: Sonority, Harmony, Melody, Rhythm and Growth (or Form but who wanted to call it SHMRF?).

Originating with Jan LaRue (1918-2004) in his Guidelines for Style Analysis (I'm not sure when it was published originally, but I'm sure I was talking about this when I was teaching music at the University of Connecticut in the 1970s), it's an approach to help students and music lovers not yet versed in the technicalities of music to be able to describe what they're listening to and by gradually expanding their awareness, hear it with greater understanding and enjoyment.

Pronounced Shmurg, it just sounded evil. Under the leadership of another villain in The Doomsday Symphony, N. Ron Steele (if anyone remembers the Enron scandals of the '90s), it became a Wall Street corporation that is buying up music licenses, broadcast and recording rights, copyrights and patents so that it will eventually control every aspect of music throughout the world.

Only in my current novel-in-progress do I reveal that it's actually Steele, Haight, Mayme, Rook and Griedman. Their intent is to make classical music as accessible as popular music, regardless of its impact on its quality (the “dumbing down” of the Arts) so they can sell more product to more people. Eventually, Steele's goal is to be the first corporation to run for President (though that, it seems, is already happening in 2016).

Anyway, it turned out I had this great title, The Lost Chord and some great characters like Yoda Leahy-Hu of the International Music Police so I decided to rewrite my initial parody as a more “original” [sic] novel and so it became the second in my series with Dr. Kerr trying to solve a murder mystery that led to yet another SHMRG plot. It seemed logical, at the end, to bring in Klavdia Klangfarben who'd been left in limbo, so to speak, at the end of The Doomsday Symphony.

So I removed the original parody and replaced it with the new novel using the same title, The Lost Chord which you can read here.

This one involved a parallel plot set in the 19th Century involving the identity of Beethoven's “Immortal Belovéd,” and so this became the increasingly more involved subject of the third novel in which Klangfarben returns as the full-out villain trying to locate (and eliminate) all the heirs of Beethoven and the Immortal Belovéd – including a few Dr. Kerr and Cameron meet at one of those fabulous English houses like Downton Abbey where his friend LauraLynn Hardy (the heroine from The Lost Chord) is about to marry Burnson Allen. The house was designed by a devotee of the Fibonacci Series and so everything – and I mean everything – is dominated by the Golden Section.

This became The Labyrinth of Klavdia Klangfarben which as yet hasn't been posted on-line.

Finishing that before my impending heart surgery in November, 2014, I was already working out details for its sequel, despite the fact I was calling these three novels The Klangfarben Trilogy. Without giving away how I managed to eliminate the villain, let's say it could be awkward to bring her back for the fourth novel in the trilogy...

And so, while recuperating from a heart by-pass operation, I began mapping out the details of my fourth full-length novel (not counting the original novella, The Schoenberg Code). Like the others, it would be a “parody” on several different levels, and this one involved a bit of Proust, considering the importance of Time in the way the plot unfolds, borrowing elements from his In Search of Lost Time (formerly known as Remembrance of Things Past) or, in the original French, À la recherche du temps perdu. It became the story of Dr. Kerr trying to find an old friend who, for some reason, has disappeared or been abducted, a composer named Thomas Purdue.

And so, it had to be called In Search of Tom Purdue.

It has been a slow process, starting work on it back in the summer of 2015, mapping it out, filling in outlines with details – and especially names, like one villain named Perdita Vremsky (from perdita, the Latin for “lost,” and the Russian vremya for “time”) – and today, gradually nearing the end of Chapter 7 at 70,344 words.

(Yesterday, for a brief scene, I created a quartet of middle school music students who've created their own band of super-heroes, the Tonic Avengers...)

Since most of my day is spent novel-writing – and my productive “creative-time” is in the morning and (with any luck) into the afternoon – I have found it less likely I would write in the blog. I found it distracting me from the novel. And I didn't always want to be blogging about "what I wrote today."

I have been blogging about the music on the programs with the Harrisburg Symphony and Market Square Concerts – and I took the 12 Days of Christmas off to complete a short Christmas motet on “O Magnum Mysterium” which, unfortunately, I didn't think very practical (and, like everything else I've been composing, who would want to perform it, anyway?), so I never bothered transforming it from sketches to first draft.

And now another pair of concerts is coming up that need to be written about which means I need to take time away from the novel to get them done. And writing for the blog – this blog – even something that doesn't require research or planning or much thought at all, has not only taken a back seat, it's fallen off the train completely.

I should probably get back to blogging more or less regularly, perhaps in the evening, though my brain is usually not at its most creative, then. At least, it would keep me from watching too much television.

The problem has always been finding the Time to write – but perhaps the Time itself is not the issue?