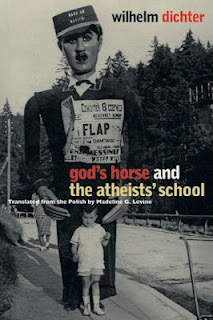 This is one of those books I would probably never have found if not for word-of-mouth.

In the mid-90s, a close friend of mine told me his dad had written a book – “God’s Horse,” a kind of memoir about growing up in Poland – but it was only available in Polish. It had even been a finalist for the NIKE Literary Award, Poland’s highest prize for writers. The English translation finally came out this year – a long wait! In the interim, two more volumes followed and this English edition contains the first two. The third is currently in preparation.

Of course I was going to read it – who wouldn’t want to read a book by their friend’s father?

Usually, I’m not one to write reviews, especially where friends are involved, since it’s difficult to be honest either for the reader or the friend. Would I like it? What would I say if I didn’t?

So, familiarities aside, yes – I liked it and I don’t have to worry about finding something to say just to be nice. Given my association with the author and knowing his family – I’d met them in the late-70s – my immediate reactions may be different than yours. 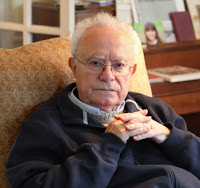 To begin with, consider these dates: Wilhelm Dichter was born in what was then southeastern Poland (once part of Austria) in 1935. The Soviet Union occupied the area in 1939, followed by the Germans in 1941 in advance of the Nazi invasion of the Soviet Union. Though “Dichter” is a German word – it means ‘poet’ – Wilhelm’s father’s name was Rabinowicz and his family was part of the Jewish community that transcended the political boundaries of the day.

I have never been comfortable with what is generally termed “holocaust literature,” turning this horrible period of history into some form of entertainment: I could not imagine sitting in my living room watching “Sophie’s Choice” on TV and it took everything I could muster to go see Roman Polanski’s film “The Pianist.” Living in New York City and feeling particularly 'down' one day, I was riding the subway and realized the elderly man sitting next to me had a series of numbers tattooed on his forearm – a daily reminder of life in the concentration camps – and here, I had been complaining about having a bad day…

Reading about this particular childhood – what should be an idyllic, innocent time most of us should recall with pleasure – was more powerful for its narrative style. Some reviews have described its clipped and uncomplicated sentences as “Hemingway-like,” though I think that’s inaccurate. Dichter’s style in “God’s Horse,” the story of this childhood, may be telescoped and simple but its viewpoint is that of a child, not an adult looking back on his childhood and certainly not that of an adult with an aversion for subordinate clauses. It is this child-like simplicity – and I am reminded, when listening to Mozart, of the difference between child-like and childish – that gives this part of his story its impact. If a child could not comprehend the horror he was experiencing, simple direct prose can seem vague, almost indifferent – this, then, was ‘normal’ – but the adults who are reading it can infer what he only implies.

When I got to this part of the story early in the book, I often found myself sitting there staring at the page, stunned. That this inhumanity could have been experienced by anyone filled me with hopeless anger, yet it was experienced by someone I knew, someone I had sat across from at the dinner table and joked with, someone who had not only survived this but went on to absorb it, somehow, into his daily life.

A child who should describe the joy of, say, going to visit his grandparents on a sunny day is instead remembering leaving the attic where they’d been hiding, his mother taking him along to visit her sister’s family who were hiding in a well outside the town and how a bomb had hit the house while they were gone, exposing the attic where his father, ill with tuberculosis and always afraid his coughing would give them away, had hung himself by his tie.

It was difficult to read – I cannot imagine how difficult it was to remember it and write it down much less to have lived it – but the story moves on from there, during the transition to Communism, his mother marrying a man who had also lost his family, and adopting his name – Dichter – now facing another form of discrimination, not only being Jewish but having a German last name in Russian-dominated Polish society that equates Germanness with atrocity. As a Jew, Wilhelm finds himself in a school with mostly Catholic children run by the atheist state. His awareness of the world, growing up with the political propaganda, not just the bullying that seems to be the universal norm for this age, shifts again in the formative years of his early teens.

The writing style changes subtly with his maturing viewpoint. He observes squabbles within his family and their friends, tinged by the best-forgotten past and the delicate balance of the party line. He deals with issues any young teenager would face – he liked to draw, would he become an artist? or an engineer like his step-father? The drudgery of school, the grayness of living in a Warsaw still being reclaimed from the war’s rubble, are all part of this growing up.

History, from what I learned in school, was a collection of wars and battles, kings and presidents, which rarely seemed to notice there were people who lived under them or died on their battlefields. We read biographies of famous people or novels about them. But very rarely do we get a glimpse of the daily life, the average people who usually count for nothing in the greater historic scheme, dealing with the realities these so-called great men have created.

There is a recurring line that whenever Wilhelm is offered tea, he always says “but make it strong.”

It may not be just the tea that has made the author strong, helped him survive and adapt. But it is a riveting story that – knowing him and his son – is more than just a story. When I finished reading it, I thought someone should make a movie of this – it doesn’t need the usual Transformers or comic-book Super Heroes that populate movies so popular these days. Instead of animated figures, they’re real people, here. And in a way, wouldn’t we – on the outside – learn more from real people than from computer-generated graphics?

A few days later, I had stopped by to visit a friend who offered me tea, and I found myself saying, “Yes, please, but make it strong.”

*** ***** ******** ***** ***
Wilhelm Dichter’s “God’s Horse and The Atheist School” has been translated into English by Madeline Levine, professor emeritus from the University of North Carolina at Chapel Hill. It is published by Northwestern University Press and is available at Amazon and Barnes & Noble. The third volume, Learning English, appeared in 2010 and the translation is in preparation.