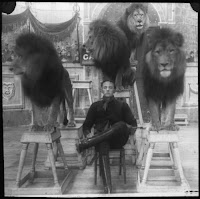 While it's Monday again (it has this annoyingly recurring habit) and even though I don't have a Lion's Den of an office to go to where I ritualistically immerse myself along with other like-minded Anti-Mondayites, thereby creating an out-waving source of ever-widening metaphysical misery - think brain-waves or ripples on a pond - I found myself heartened by a couple of blog-posts over at "Liberated Dissonance" about one of my favorite composer's music, especially thought-provoking after dealing with some problems (also annoyingly recurring habits) typical of a composer facing imaginary performers and critics during the process of figuring out the viability of this passage or that one.

Over at The New Music Box, there's an article by soprano Tony Arnold, "Digging Deeper: Singing the Music of Elliott Carter."

Especially this bit which got me thinking as I wrestle with writing a cello part for my Piano Trio which I worry is "not idiomatic":

--- --- --- ---
"...the very notion of idiomatic writing, for any instrument, is usually unconsciously tied to the familiar, historic repertoire for that instrument. Having embodied this repertoire, performers sometimes conflate threads of stylistic musical requirements with those of technical efficiency or “performability.” One conclusion frequently drawn from this conflation is a tenet that there exists an idiomatic paradigm for each instrument. Not surprisingly, these paradigms almost always fall within brackets of one or two narrow styles (that differ according to instrument). All of which prompts me to ask: are the virtuosic piano works of Liszt really “pianistic,” or has the repetition of these works, coupled with Liszt’s cemented place in history, colored our view?
--- --- --- --- 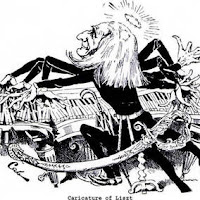 There are certain technical elements a composer would need to consider - like the physical limitations a hand can encompass - but generally it would seem the composer sets the challenge which the subsequent generations of performers figure out and, whether through a process of adaptation or evolution, make the "new idiom."

A case in point would be Paganini who convinced people he'd sold his soul to the Devil in order to be able to play with what was regarded as a super-human technique. Nowadays, any over-achieving conservatory student can trot out his caprices and concertos.

The other article is by long-time Carter Friend and Champion, Charles Rosen, musing on the recent concert celebrating the composer's 103rd Birthday (and who has seen more Mondays or dealt with more lion-like performers and critics in his life than a composer turning 103?). It's at the New York Review of Books blog: Elliott Carter's Music of Time.

This is specifically about the complex temporal relations in Carter's counterpoint which is a textural issue I've been dealing with (on a much more simplistic level) since the mid-70s, long before I became familiar with much of Carter's music. The idea that strands of music can exist in "separate tempos" is nothing new - Bach writing a long-breathed melodic line accompanied by 'walking' eighth notes in the bass - and the argument is often how this is to represent the multiplicities of our daily existence versus just the sheer chaos of something that seems to have no relationship to anything else to a typical, easily distracted listener.

When I lived in New York, I could walk briskly down Broadway surrounded by an Ivesian cacophony of traffic, conscious of their speed versus my speed (the time I met a friend headed to the ballet school where he danced and I played the piano: he took the bus because he didn't want to be late; I chose to walk because I was too cheap to deal with busfare and preferred the exercise - his bus arrived at the corner the same time I did, the confluence of disrupted time and steady time, perhaps, or the contradiction of motorized improvements over "idiomatic" forms of transportation). I am one cell floating along in the mass of pedestrians jostling around me, past me. I can walk more slowly or I can walk faster, but somebody else is always faster or slower. I may be walking quickly - good for the heart - but thinking of a beautiful Schubert song like Du bist die Ruh with its slowly unwinding phrases. In the background, I am conscious of somebody's boombox or a car radio, most likely playing not Schubert. And if I am enjoying a beautiful sunny day (why is it that a ten-minute walk in the rain seems longer than a ten-minute walk in brilliant sunshine?), it doesn't matter how fast or slow I walk, I am still likely to be late at my destination unless I keep track of the time everybody else has deemed the world needs to function at, by periodically checking my watch or those time-and-temperature clocks along my route, whether they're all tuned to the correct time or not.

But now it's Monday again and I need to get to work, facing the lions in my study as I pick up where I'd left off the week before.

Posted by Dick Strawser at 9:28 AM