One of the things any artist must do – a musician, a dancer, an ice-skater, a skate-boarder – is make it look easy. No one wants to see you look like, “wow, ya know, this is really hard work!” 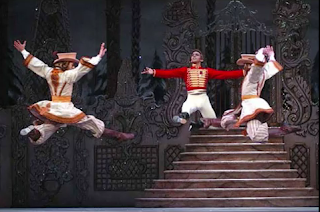 I know, it’s easy to overdose on Tchaikovsky’s “The Nutcracker” at this time of year but one of my all-time favorite dances is the Russian Dance, the “Trepak,” which is part of the entertainment (or divertissement) in the second act of the ballet.  (The Trepak is originally a Cossack dance from Ukraine, particularly the area around Kharkov. Here is an example of some standard Cossack dance 'moves' as performed by Russian dancers during an American basketball game (!!!) - see especially c.0:40 into the clip as the one guy demonstrates how they "dance on the seat of their pants.")

In most productions of the complete ballet, the dancers in each of the individual dances that make up the suite perform only their one dance. So, yes, they only dance for about a minute out of the whole evening, but I think you’ll realize how much work they’re doing in that one minute!

In this Royal Ballet production, talk about coordinating dance-steps to music! (The still photo – see above – is not from this video but it is from this production – you can see how high these guys actually leap and how well they’re positioned as if hanging in mid-air.)

I hadn’t seen the San Francisco Ballet production before and while it’s exciting, I’m not sure how it happens, but it looks like all three of them add an extra beat about halfway through – it looks like all their downbeats happen on the music’s up-beats and then they don’t end with the music! But they’re together! Maybe that’s what the choreographer wanted…
This performance, one of many performed by local companies around the country, features three young boys combining dance with gymnastics. Talk about energy!

One of the great traditions of ballet is the “love duet,” the pas de deux and one of the most beautiful is the one in “The Nutcracker.” This performance, from the American Ballet Theater’s production in 1977, turns the “dance for two” into a “dance for three,” adding the character Drosselmeyer who, in the first act, had presented Clara with her toy nutcracker – after the battle with the mice, he’s turned into a handsome prince (in her dream, that is). Usually, Drosselmeyer is an eccentric toy-maker with an eye-patch who seems at times mysterious and, other times, a bit evil. In this production, he’s more of a wizard (dressed in black like a regulation bad guy) controlling Clara.

Here’s Mikhail Baryshnikov as the Nutcracker Prince with Gelsey Kirkland as young Clara (in some productions, she’s called Marie). Alexander Minz is Drosselmeyer. This clip begins with the end of the Dance of the Sugar Plum Fairy followed by a fast dance for both the Clara and the Prince dancing sometimes separately and sometimes together, then finally becomes the great “duet.”
- - - - - - -

- - - - - - -
While much of the famous suite from Tchaikovsky’s ballet ended up in Walt Disney’s Fantasia, another favorite scene of mine from this 1940 animated classic is their version of another well-known ballet, “The Dance of the Hours.” This music sounds light-hearted and delightful – it’s part of an after-dinner entertainment in the midst of a very bloody opera called La Gioconda by Amilcare Ponchielli.

It has survived countless parodies – including Alan Sherman turning it into a letter a boy sends home to his family from summer camp (“Hello, Mother; Hello, Father; here I am at… Camp Regata”) but none funnier than seeing it performed by dancing ostriches, hippos, elephants and crocodiles.

Naturally, ballet dancers are graceful and exquisite and delicate. And these animals are, well… not so much… There are many inside jokes but I think even if you’ve never seen a ballet before, you would still find it funny. I thought it was very funny when I was 6 years old and saw it for the first time. After I’d played piano in a ballet school in New York City when I was in my late-20s, rediscovering it for the first time in years, I thought it was hysterical. Even now, each time I see it, I continue laughing.