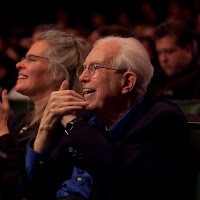 Yesterday, I was talking to some students of mine at the State Street Academy and mentioned that the compositions most people consider the first major works of the new 20th Century Style – Schoenberg’s Pierrot Lunaire, Stravinsky’s Rite of Spring – were composed around 1911-1912. Pointing out that, here we are in 2011-2012, perhaps the first “great” works in what may become the new 21st Century Style have yet to be heard, when it occurred to me Elliott Carter is actually older than Pierrot Lunaire and The Rite of Spring.

Last Thursday, several musicians played three world premieres of works by Elliott Carter plus three additional works that had received their premieres in Europe earlier in the year. They had all been composed in the past year.

- - - - - - -
Correction: Reports I'd read in the new music press indicated three world premieres and three American premieres on the program. Since I was unable to attend, this was all I could go by. As it turned out, one of those works mentioned in the Sequenza21 post (see below) talked about the Double Trio which seemed to be a world premiere. When I've since found the 92nd Street Y's page about the concert, it indicated the Double Trio was one of the American premieres. Then, to add to the confusion, two short works composed in November were added to the program and announced from the stage! So in actuality, there were four world premieres! Thanks to Joe Barron for the correction: he was there and you can read his review here: love the bit about getting a chance to meet Carter afterwards.
- - - - - - - -

And Mr. Carter, looking frail but with a twinkle in his eyes, was in attendance and accepted the audience’s applause and birthday greetings, though his 103rd Birthday isn’t officially until today.

(You can read the New York Times review, here. The photograph of Carter (see above) taken at the performance is by Times photographer, Richard Termine. Carter is seated with Carol Archer who produced this program at the 92nd Street Y.)

Follow this post at Sequenza21 by cellist Fred Sherry, a musical collaborator with Carter and long-time champion of his music and, not coincidentally, a close friend.

Basically, Carter called Sherry at various times asking him about playing a certain combination of chords on the cello (“good, they’re in my new Double Trio”), if a viola could hold a high F-sharp for two slow measures (“good, that’s the ending of my new String Trio”) and telling him he’s thinking of setting the poetry of e. e. cummings for tenor and chamber orchestra.

That’s when Sherry decided these new works should be heard to celebrate his impending birthday, No. 103.

Two other new works were brief – a duet for cello and bass clarinet (for Mr. Sherry and Virgil Blackwell who has served as Carter’s secretary and assistant over the past several years) was composed on Nov. 5th, 2011; and “Mnemosyné,” composed on Nov. 17, written for solo violin. World premieres, these were added to the program and announced from the stage. 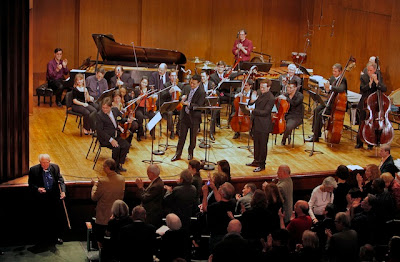 UPDATE: Elliott Carter (lower left corner) accepting the audience's applause at the end of the concert, following the world premiere of "A Sunbeam's Architecture," composed earlier this year (you can see what a substantial chamber ensemble this is). Photograph by Cory Weaver and posted at Sequenza21.
- - - - - - -

In a separate interview reported (unexpectedly) in the New York Daily News, Carter mentioned how in the ‘70s he was writing this vast orchestral works with huge complex scores (and I mean physically huge) that might take him a whole year to compose. But now, due to physical limitations among other things, he prefers smaller combinations and shorter works, producing a series of miniatures, pointing to an even newer piece he'd been working on as a Christmas present for oboist Heinz Holliger which he says took him three days.

When I met Elliott Carter, standing in a box office line at the 92nd street Y in 1978 – he was celebrating his 70th birthday with a performance of all three of his string quartets there – most people then would’ve assumed he’d be ‘retiring’ soon, as old composers often do. So his newest works then – like the mind-blowingly complex vocal piece Syringa which I heard at its premiere – were considered music of his Late Period (you know how Beethoven is divided into three parts, Early – Middle – Late?) but Carter just kept composing and producing a whole range of new works headed in a less dense but rarely less complex direction which, for lack of a better term, people started referring to as his “Late Late Music” or “Post-Late Music.”

Since his 100th birthday, as one recent interview reported, he has completed 19 new compositions. 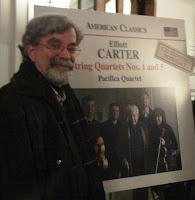 In 2008, on the verge of his Centennial Birthday, I heard the Pacifica Quartet play all five of his string quartets (see photo, left) and was cheered to see, after the Pacifica commissioned him for another quartet, a sixth, he said “well, in a few years I should be about ready to write another string quartet.”

(Incidentally, joking recently with the guys from the JACK Quartet when they were in town, their bio says the oldest original work in their repertoire is Charles Ives String Quartet No. 2 which was written between 1911-1913 which means Elliott Carter is also older than their "oldest" piece. Yet they haven't played any of Carter's quartets yet, though they've wanted to work with him. "I wouldn't wait too long, you know... but maybe by then, there'll be a sixth quartet to work on.")

There are two song cycles being premiered this week – the Cummings poems on the 8th and three new songs setting poems by T.S. Eliot for bass baritone and chamber ensemble. These are not miniatures but fairly substantial works given their scope, length and instrumentation.

For this birthday post, I thought I’d check out a few piano pieces. I'd recently posted the early Cello Sonata (1948) with the Cello Concerto (2000) so this time I want to post the Piano Sonata, another mid-1940s piece, with three short, more recent pieces.

Here is Ursula Oppens, long associated with Carter’s music, playing a piano sonata in the “grand style” that could belong in the repertoire of any pianist who plays the huge B Minor Sonata of Franz Liszt or comparable sonatas by Samuel Barber or Aaron Copland. It may not be what Carter sounds like now but it is one of Carter’s great early works and an incredibly imaginative one that has a lot of Carter’s later fingerprints already evident.

One of these stylistic traits is the juxtaposition of time, something that is fluid as a psychological experience. Like counterpoint in which one independent melodic line is pitted against another independent melodic line, Carter does this with two strands that seem to move in different tempos. It might be easy to explain it as 16th notes moving against quarter notes in Bach except in Carter, the pulse of one strand might be dotted quarters and the pulse of the other strand could be dotted eighth notes. One could be metronomically strict (clock-time) and the other one more fluid, more varied, less “ticky.” That’s basically the distinction in the Cello Sonata where the clock-like piano part (very logical, clean and architecturally Left Brained) is pitted against the rhapsodic cello part (unexpectedly varied, by comparison, emotionally Right Brained and, in a way, “messy”). While not as overt as the later cello sonata, you can still hear this in the Piano Sonata, in addition to the strongly contrasting ideas that are differentiated by, for instance, the opening blocks of sound and the subsequent scurrying passages (one of Carter’s favorite descriptors is the Italian scorrevole).

There are many things that may sound “traditional,” particularly the development and restatement of material (themes, if you will) which is not much different than you’d hear in a Beethoven or the Liszt sonata. Compare the very opening of Clip #3 (on a D moving to a D/C) with the very opening of Clip #4 (where it’s now E-flat and D-flat) which, at 2:00, sounds like a recapitulation on D but instead of a C-natural, it’s now a C-sharp which means the tension is still not yet resolved until, at the end, it reaches a broad and beatific B-major chord, the tonality in which the sonata began.

There’s even something as “academically traditional” as a fugue (Clip #3, beginning at 3:49) which is primarily in B-flat Minor.

Now, fast forward through the next fifty-three years to 1999 and two short pieces written for Ursula Oppens, called “Two Diversions.”

In this first clip, the performer (Marc Hannaford) sets a metronome to the “pulse” of the one time-strand, a slow but steady ticking line of intervals, against which Carter juxtaposes another more varied and often wildly contradictory, rhapsodic line (not very different from what he was doing in the Cello Sonata of 1948) but here, just single notes usually against the clock-like intervals. Even though the metronome you hear has nothing to do with the rhythmic or metric notation of the piece (trust me!!!), it’s a way to help you focus on one aspect of the piece.


Here is the piece in performance (without metronome) by Thorsten Kuhn, recorded on Carter’s 100th Birthday.

Then, one last short, recent piece, a brilliant barrage of notes (mostly single notes one at a time but all over the keyboard), called Caténaires, about 3 1/2 minutes of constantly cascading 16th notes premiered by Pierre-Laurent Aimard on Carter’s 98th Birthday just a few days after he’d received the manuscript in the mail. Here, it’s performed by Sean Chen.


This has been described as “the unlikeliest piano piece” by Elliott Carter who, on the verge of his 98th Birthday, was still experimenting with the idea of how you create sounds and constantly discover something new to say.

We should also be so lucky, at that age.