A champion of the traditional style complained that modern composers wrote only in the newest forms and neglected the tried-and-true forms of the past and used a multiplicity of awkward rhythms and imperfect rhythmic subdivisions of the beat rather than adhering to “the proper use of perfection.” They also indulged in “broken rhythms” and capricious (even lascivious) movement rather than confining themselves, like past masters, to a more modest restrained movement. Some of these new compositions relied on the repetition of such complicated rhythmic patterns often overlapping with similarly repeated melodic patterns to create something so complex, it seemed more mathematical than anything close to the proper attributes music is to instill in the listener (which is why some religious leaders also came out against this new musical style).

It would appear, judging from his comments and those of his colleagues, these modern composers were nothing but a menace – if not to society, at least to the quality of fine art.

So when do you think this stylistic disagreement originates from?

Given the mathematical patterns, perhaps you’re thinking of Arnold Schoenberg and his concept of ‘serialism’ – generally dismissed as more math than music – where patterns of twelve notes (a “row”) could be repeated and manipulated ad infinitum or the next generation of serialists like Boulez and Messiaen who, bored with just serializing pitches, also serialized rhythms and even dynamics.

But since it’s primarily about rhythm and “movement” (in this sense, rhythmic motion rather than the divisions of a larger piece into individual movements), you might think it stems from the complex rhythms of the early 20th Century – Stravinsky and Bartok with their complicated, constantly changing meters, or even the Russian composers of the late-19th Century like Rimsky-Korsakov, Mussorgsky and Tchaikovsky who sometimes used meters like 5/4 or 7/8 which they found in East European folk music.

Or maybe it’s between the adherents of Brahms with his legacy from the Symphonic Age of Beethoven who were opposed to the Music of the Future championed by the followers of Liszt and Wagner whose sense of rhythm and harmonic passion (certainly far too emotional for decent people) was certainly more complicated and more “lascivious” than anything composed in previous generations. And it wasn’t just their music – Wagner composing Tristan und Isolde, about a man falling love with another man’s wife, himself fell in love with Cosima, the wife of his conductor-friend Hans von Bülow (and the daughter of Liszt). (And let’s not get into the sordid details of their private lives!) How immoral was that? And the music that went with it… It was enough to make decent people shudder.

Brahms, hearing new works from the next generation composed by twenty-somethings like Richard Strauss and Gustav Mahler, worried about the cesspool that music was rapidly becoming.

Could it go back further? There were, after all, famous stylistic “wars” during the 18th and 19th Centuries, too.

Actually, the first paragraph is a summary of the argument you could read in Jacques de Liège’s monumental work “Musical Speculation” or, more accurately “The Mirror of Music,” Speculum musicae in which he complained greatly about the followers of Philippe de Vitry.

This was written around 1324, give or take a year. 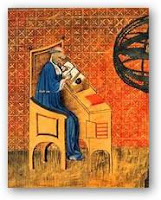 The idea of bringing greater variety to musical rhythms is something that was going on in 1279 but composers of that generation preferred, perhaps diplomatically, to use both patterns and consider both of them “good.” But Philippe de Vitry (see right) preferred to place the “long note” at the front (giving it a certain lilt – the ‘lascivious’ movement his critics referred to) and to ignore the old-fashioned pattern completely.

And if that wasn’t bad enough, there was the introduction of duple time – perfection was based on threes (the Trinity being the model) and to do something in two or four (like our modern march) was to embrace imperfection and deny the Trinity! (Why would you do that?!)

Plus, they wrote only motets and cantilenas (long, melodious solo songs) usually about love, and ignored the tried-and-true forms like the Mass, organum (taking a segment of Gregorian chant and superimposing over it one or two newly composed parts) or the stately conductus (a kind of processional motet).

Even Pope John XXII issued a Papal Bull (in a sense different from the modern slang use of the word ‘bull’) around 1325 not against the theory of this new style but against the practical results of the new art, concerned mostly about the impact it would have on the sanctity of the music sung in the church service, especially considering the tranquility generated by the perfection of plainsong (what we consider Gregorian chant). This new music, with these new and complex rhythms was agitated by so many short notes and disturbed by “hockets” (a rhythmic device with a short rest in one part allowing a note in another part to fill in the missing part – and yes, perhaps it’s the source of our word “hiccup”) and that the use of plainsong (or chant) in these new-fangled compositions was rendered unrecognizable by being (disrespectfully) subjected to such complicated rhythmic devices.


The upholders of tradition called their music Ars Antiqua (also Ars Veterum, Traditional Art), based on the proud history of French music going back to about 1160.

Those who broke away from the traditions of the past, like Philippe de Vitry, called their music Ars Nova or The New Art.

And yet, today, these arguments – and examples of music from both these styles – seem so old and foreign to us, unfamiliar, perhaps even pointless to us today, with our modern technology and cool new techniques and attitudes about listening to music.

If Columbus hadn’t dared to reach India by sailing west, would the world still be flat? Or if Galileo never guessed the Earth was not the Center of the Universe, would men have ever landed on the Moon?