Yes, I am an author - or so they tell me over at NaNoWriMo where November is "National Novel Writing Month." Every November, they hold their 50,000-word challenge, urging everybody anywhere who has always wanted to write a novel to "git 'er done" (in the American parlance) - or at least to get 50,000 words of 'er done (or, more realistically, of a first draft done). 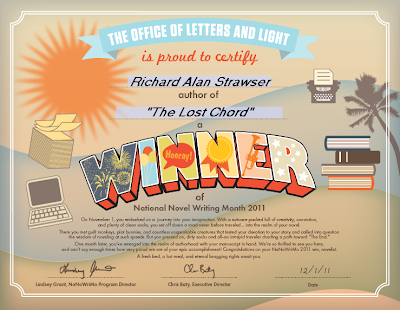 This year - my fourth NaNoWriMo adventure - I decided to do a complete rewrite of a novel, one of my music appreciation thrillers, I'd started with NaNoWriMo 2009 mainly because I liked the title and some of the characters' names - the plot, not so much. In fact, that original "Lost Chord" was a direct parody of Dan Brown's latest opus, The Lost Symbol and this time around I wanted to remove all parodiness from my latest music appreciation thriller. (You can read about last year's novel, The Doomsday Symphony, here. My earlier parody of Brown's The DaVinci Code can be read in its entirety, here.)

While certain characters remain more-or-less the same - like the villain Tr'iTone and one of his disguises, Dr. Iobba Dhabbodhú, or the Director of Security for the International Composers Alliance Yoda Leahy-Hu, and the beautiful LauraLynn Harty (though I did change her hair color) not to mention other characters like V.C. D'Arcy, ICA Agents Kaye Gelida Manina and Wanda Menveaux or Barry Scarpia - new ones have been added, like Fictitia LaMouche (an on-line journalist whose original name is Felicity Lychpit), teachers like Emilio Fabbro and Dudley Böhm, or the singers Rita Pagliaccio and Cora diLetto (a little more complicated, it's a line from Cherubino's aria, 'Voi che sapete' - at 2:18 into this clip with Joyce DiDonato, you can hear 'Ch’ora è diletto,' this moment of pleasure) and while I'm stealing names from opera arias, let's not forget the yet-to-be-introduced Porgia Moore and Barbra Seville.

I'm also expanding a few walk-on roles from the original, like Garth Widor (an agent of one of the villains, N. Ron Steele, the evil CEO of SHMRG), Peter Moonbeam (a Native-American version of Pierrot Lunaire) and turning Phil Harmon (formerly chief of security for Lincoln Center's Avery Fisher Hall) into Samuel Schäufel (as in shovel), a German version of Sam Spade, the detective from The Maltese Falcon. You see, the biggest change in the setting is moving it from Lincoln Center to (mostly) the Schweinwald Festival in Bavaria (where there actually is a Schweinwald - which means "Hogwood" and I chose it because, back in the 19th Century, there could be a [purely fictional] legendary music school there which could be a kind of musical Hogwarts) and that's where a search is on for something... with clues to be found on a headless Mozart porcelain doll, standing on a map of Malta (why it's referred to as The Maltese Mozart) which was discovered on the site of the old Falkenstein Farm, not far from the even older, possibly haunted Castle Schweinwald.

Then, too, part of the novel's new opening is set in an artist's colony called Benninghurst where the Director, something of a fund-raising wizard, is a guy from Australia named Sidney Drummoyne (Drummoyne is actually a suburb of Sydney). The resident nurse is named Anna Miszklysczewska whom everybody calls Annie M and the house mascot is a little dog named Poco. Stylistic arguments about musical aesthetics involve three composers: serialist Luke van Rhiarden (an anagram of Thomas Mann's Adrian Leverkühn in Doktor Faustus) is accused of lacking a heart while Seth Mazrif (whose names are anagrams for New Age artists [John] Tesh and Zamfir) is accused of lacking a brain. Lionel Roth, a bundle of insecurities who actually becomes a major character, lacks the courage of his own convictions but is peripherally involved in the gruesome murder of composer Robertson Sullivan whose opera, Faustus, Inc. (a corporate version of the Faust legend where Mephistopheles is a CEO named Arachne Webb) will be premiered at the Schweinwald Festival except the recently completed score has just been stolen which means... &c &c

Now, Robertson Sullivan's cousin LauraLynn Harty is descended from the composer Harrison Harty who had studied at Schweinwald in 1880 along with Mahler, Ethel Smyth and Hans Rott. (Harrison, a little-known cousin of Irish composer Hamilton Harty, emigrated to the USA where he became a professor of composition at the Jones School of Music in Indiana.) Late in his life, he married Penelope Pintscher, daughter of the Chicago railroad tycoon, Glutius Pintscher. Penny and Harrison have twin sons, Cuthbert and Norbert (a.k.a. "The Berts") who, after their parents' deaths, are raised by Penny's sister, Nicola Deimler and thus inherit considerable industrial wealth and connections. Norbert's sons are Oliver Costello and Stanley Abbott Harty. Cuthbert's daughters are Catherine (who marries Richard Shaw, becoming Katie Shaw, and their son is Bernard who marries Pashmina) and Mabel (who marries Gilbert N. Sullivan and has a son, Robertson).

Oh, there are a few other things I've kept: the elevator ride at the Washington Monument, the Night at the Opera parody using the Barber of Seville (also the state room scene transferred to a backstage dressing room), and the "Hu's on First" scene. (You'll have to scroll down for all of these: none of them begin "at the top".)

Did I mention this is a comic music appreciation thriller?

Well, at any rate, 53,473 words of the thoroughly revised (as in "starting-over-from-scratch-almost") version of The Lost Chord are done, but the novel is far from over.

The game, as they say, is afoot!

Labels: About The Lost Chord, nanowrimo