Notes from the Hypocracy

I don’t often bother getting into political issues, either on Facebook or on my blog, but I was checking out a friend’s blog and saw this story:

“Author Chris Rodda reported today (03/30/2011) that potential presidential contender Mike Huckabee, in a speech at the Rediscover God in America conference held in Iowa last week, stated his wish that all Americans should be forced, at gunpoint if necessary, to listen to the lectures delivered by pseudo-historian David Barton.”

My first reaction to this kind of statement was wondering, “Aren’t these the same people who oppose Obama's Health Care Reform" (which several Republican states’ attorneys general have filed suit against) "because it requires everyone in the country to have health insurance” which they feel is unconstitutional?

Was there any outrage among Huckabee's audience of fellow Republicans and pastors about the unconstitutionality of such an idea in the mouth of a past and likely future Presidential candidate?

So it’s okay to think – and should Huckabee be elected, perhaps likely initiating the proceedings – that everyone in the country should be required to listen to one person’s opinion at gunpoint, no less!

[UPDATE 5/16/2011: according to the New York Times, Huckabee has decided not to run for President, after all! And La Donald won't have to hear those dreaded words You're fired on election day. Two down...]

Another post today also got me thinking, in a slightly different direction. I haven’t been following the news – mostly because so much of it has been about the killing of bin Laden or the civil war in Libya, even displacing reports of the once ubiquitous Japanese nuclear nightmare that everyone seems to have forgotten.

But a friend on Facebook posted this link about the recently resigned Senator John Ensign, the “respected gentleman from Nevada” (or whatever formulas United States Senators use in recognizing their colleagues on the floor during debate) proving that, alas, not everything that happens in Vegas, stays in Vegas.

This, of course, from one of the supporters of the Defense of Marriage amendment…

And isn’t this the guy who once called on President Clinton to resign after admitting an affair with Monica Lewinsky because “he has no credibility left”?

Yet Ensign didn’t resign until May 2011, despite interventions by his “spiritual adviser” and various colleagues for an affair that was raging (so to speak) between 2007 and 2008 and which he publicly acknowledged in a press conference in June, 2009? This past March, he announced he would not seek reelection in 2012, fearing an ugly campaign.

"’At this point in my life, I have to put my family first,’ Ensign told reporters at a news conference in Las Vegas.”

This may have been something he should’ve thought about in 2007 when he started pursuing his friend and staffer’s wife.

(I don’t think the Ten Commandments says anything about coveting staffers’ wives, but I’m pretty sure it says something about coveting your “neighbor’s wife” whether they were next door neighbors or not (they did, however, live in the same gated community which proves that even elite neighborhoods like that don’t always protect you against everything). It also seems there was enough reason to include the "neighbor's wife" one along with a whole separate commandment regarding adultery in general.)

And he resigns now, only because he is being investigated in the Senate for “ethics violations.”

It’s not the affair that bothers me – except the woman with whom he was having the affair claims that she gave in only because his persistence wore her down – but the hypocrisy: not just his calling for Clinton’s resignation or his support of the “Defense of Marriage” Bill (which I think, if you're trying to protect the institution of marriage, ought to at least make adultery a punishable offense) but for his sheer stupidity, that he was unable to control himself against the advice and awareness of his cuckolded staffer, his “spiritual adviser” and various, presumably respected friends and colleagues, all advising him to stop the affair.

Yet he would not, perhaps even could not. 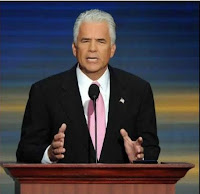 Perhaps, in the 2012 election for the Senate seat he just resigned from, John Ensign’s penis (whom the former Senator appears to be describing in the photo at right) can run in his place?

After all, if the Supreme Court decided last year that corporations have the right, like individuals, to make campaign contributions and that campaign reform was violating their right to free speech, couldn’t a man’s penis – especially one which has so clearly demonstrated having a mind of its own – run for elected office?

And he's certainly produced sufficient evidence he can be quite persuasive, if not outright charming, no doubt reasonable qualities in an elected official.

(Update: And this, about how the blood spatter from Ensign's unfolding scandal - particularly the cover-up and arranging of hush-money payments - might affect Republicans Senator Tom Coburn and former Pennsylvania Senator and Presidential ever-hopeful Rick Santorum. so there's a silver lining, after all!)

Well, enough senseless meditations for today – I’m now going to get back to work on my parody-update of Nikolai Gogol’s “The Nose.”