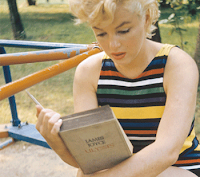 BELLO
(savagely.) The nosering, the pliers, the bastinado, the hanging hook, the knout I'll make you kiss while the flutes play like the Nubian slave of old. You're in for it this time. I'll make you remember me for the balance of your natural life. (His forehead veins swollen, his face congested.) I shall sit on your ottomansaddleback every morning after my thumping good breakfast of Matterson's fat ham rashers and a bottle of Guinness's porter. (He belches.) And suck my thumping good Stock Exchange cigar while I read the Licensed Victualler's Gazette. Very possibly I shall have you slaughtered and skewered in my stables and enjoy a slice of you with crisp crackling from the baking tin basted and baked like sucking pig with rice and lemon or currant sauce. It will hurt you.

Yes, it's June 16th again – Bloomsday! The day on which the action (if that's an appropriate term) in James Joyce's novel Ulysses originally took place in 1904.

And around this time of year, I try to read a little more of the novel. I'm not making much progress, over the years, sometimes barely remembering Bloomsday itself, but last week, I picked up my copy again and started where I had left off last year – p.424 – and last night made it to p.533, the passage quoted above.

I am now into one of the longer stretches of the book (it continues to p.609), the end of what Joyce marked as Part II and which, by those dividing the novel according to Homer's epic, is referred to as “Circe.”

For those who read a few lines and then think "shouldn't I be reading something that makes sense?" there's always Cliff's Notes... Here's their rendering of "Circe."

It is written as a “play-within-the-novel” complete with costume and character descriptions as well as stage action, but it is a surreal (or at least more surreal than normal) description of the late-night passage of Leopold Bloom and another main character, Stephen Dedalus, through a bawdy section of town known as “Nighttown,” including a visit to the local whore-house. In fact, the scene above takes place in the parlour: Bello originally appeared as Bella Cohen, “a massive whoremistress... dressed in a three-quarter ivory gown, fringed round the hem with tasselled selvedge, and cools herself, flirting a black horn fan like Minnie Hauch in Carmen”) but changed gender somehow after Bloom had a diaglogue with the fan and then the heel of her foot, subsequently changing gender himself. In the inner reaches of his mind and imagination, so far in this play, he has been brought up before the court as a pervert for writing nasty letters to women of social standing (replete with masochistic asides), sent off to be executed, then crowned ruler of Ireland and becoming increasingly god-like (“Bloom assumes a mantle of cloth of gold and puts on a ruby ring. He ascends and stands on the stone of destiny... The peers do homage, one by one, approaching and genuflecting”) before he is pilloried for being a womanizer and set on fire but, it turns out, this is all a 20-page fantasy going on in his mind while he's berating Zoe, one of the prostitutes, for smoking a cigarette.

WBAI continues its 32-year tradition of live on-air celebrations of Bloomsday. In fact at 10pm EDT, you can hear the “Circe” chapter with female impersonator Charles Busch taking on the role(s) of Madame Bella Cohen.

The broadcast, which includes related poetry and songs as well as readings of Joyce's letters to his lover Nora who inspired the character of Bloom's wife, will end with Molly Bloom's soliloquy (performed by Galway native Caraid O'Brien) as she's lying in bed, thinking about her lovers, her husband, her children and her stalled artistic career. It's 45 pages of Joyce's classic “stream-of-consciousness” but contains only eight sentences.

WNYC will also broadcast its own celebration of Bloomsday live from the Symphony Space on Broadway where Stephen Colbert will be one of the readers (in a New York Times article, Mr. Colbert admitted in an e-mail message that “Performing ‘Ulysses’ on Bloomsday at Symphony Space is the only way I’ll ever finish the damn book”)

It also begins at 7pm and will include several excerpts from the book as well as parallel passages from Homer's Odyssey.

Though Molly's orgasmic monologue (“performed by Fionnula Flanagan in a prodigious performing feat that lasts two and a half hours.”) will occur (unedited) well after midnight, the station mentions that “James Joyce’s classic novel, Ulysses, contains language and concepts that may not be suitable for younger listeners.” (No doubt...)

But it does remind me of the famous United States District Court case when obscenity charges were filed against the periodical in 1922 after they had begun serializing excerpts from the book four years earlier. The court's lawyers described the book as being "the work of a disordered mind," but that was another matter... Anyway, the initial trial delayed the publication of the complete book in the United States until 1933 when Random House challenged the decision in court. Judge John Woolsey wrote in his decision that while using familiar "old Saxon words," the work was not intended to be obscene according to the laws of the United States since it did not intend to titillate and "nowhere does it tend to be an aphrodisiac" (I am trying to imagine a whole generation of American boys growing up with wild sexual fantasies resulting from their reading James Joyce's Ulysses...). Within minutes of hearing Judge Woolsey's ruling, Random House began preparing the first publication of the work which became available in January, 1934, twenty years after Joyce began writing the novel and almost 12 years after it was first published in France by an ex-patriot publisher.

You can find out more about Bloomsday on Broadway at symphonyspace.org and you can listen to it on-line, starting at 7pm EDT, at wnyc.org.

Incidentally, if you're not one to try reading it yourself, there's a complete audiobook edition from Naxos read by Jim Norton and Marcella Riordan (there was an earlier abridged edition released in 1994, so be sure you get the unabridged recording released in 2004). It's 22 CDs and takes over 27 hours to listen to so I'm not sure you'd want to try it all in one sitting. The "Circe" Chapter I mentioned above begins at Disc 13, cut 6 and continues through Disc 16, cut 8.

So a Happy Bloomsday to all and to all, good reading (or listening)!