The Lost Chord: The Stake-Out at Verdi Square

Considering it's Earth Day, I know I should post about something appropriate – like living with geothermal heating & cooling and how much money I've saved after not having to buy fuel oil all winter even though it has added to my electric bill, which is another but by no means nearly as economically engrossing (or grossing out) a detail. The plan is, after spending four hours trying to write a reply to a friend through Classmates.com where we'd just reconnected after 43 years, and running into numerous issues with length, cutting/pasting and various code and format errors, I just want to get out, enjoy the sun and plant some green things in my back yard – hopefully, green things the deer and the rabbits won't eat, if there is such a thing...

Anyway, last night, I wrote a scene for “The Lost Chord,” my Music Appreciation Thriller parody of Dan Brown's “The Lost Symbol,” so I thought I'd include some of it for you today.

By now, Dr. Dick (in Brown, that would be Robert Langdon) has uncovered some clues in an attempt to find some composers' “Old Secrets” – the equivalent of Brown's Masonic “Ancient Mysteries” – even though he actually hasn't figured any of them out, yet. Contact has been made with the villain, Tr'iTone (a.k.a. Dr. Iobba Dhabbodhú), who has agreed to meet his informant, the architect V.C. D'Arcy, at Verdi Square (instead of Franklin Square in Brown's story). We have already met the International Composer's Association's Director of Security, Yoda Leahy-Hu (the equivalent of Brown's CIA Chief, Inoue Sato) and several of the agents, many of whom are listed below.

This, then, is an excerpt from Chapter 14 of “The Lost Chord.” 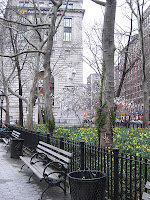 There is a tiny patch of grass and trees between 72nd & 73rd Streets where Broadway and Amsterdam Avenue intersect that most people could easily overlook as they hurry to and from the subway station there. Even fewer might know it is called Verdi Square and that the statue hidden within its trees is a monument to the great Italian composers of operas like Aida or La Traviata.

... In the 1960s and '70s, the park had fallen on bad times, a frequent haunt of drug traffickers known better locally as “Needle Park.” Imagine what addicts shooting up in the statue's shadow would have thought if they were suddenly to hear strains from Verdi's most popular operas emanating from speakers suspended among the trees: that at least had been one of the plans bandied about to help make the area safer. It wasn't until 2002 that the park found renewed life with the building of a second entrance to the 72nd Street subway station and the park was redesigned and landscaped.

On this November night, the air was crisp and the park almost completely empty despite the steady post-midnight traffic coming and going nearby. In the hurried drive uptown, V.C. D'Arcy had been outfitted with a “wire” while wireless Cobra headsets, SWAT-team mics and receivers, were outfitted for Chief Leahy-Hu and several officers from the NYPD's WHACKO Division [an unofficial acronym for Weirdos, Hoods, Assholes, Crooks, Killers & Others] wearing scruffy night-camouflage and ready to take down someone already described as a Human Hulk [who so far fits into almost all of those various categories].

The van parked casually on 72nd just west of Broadway as various agents quietly fanned out across the park's immediate vicinity. Officer Jane Watt was sent to cover the corner by the old Renaissance fortress on 73rd Street that was now the Apple Bank along with [Dolly-Sue] Apache and [Emil] Tesorro while Agent Elise Eidonneau joined Officer Barb Dwyer who was hanging out with the late night crowd over at Gray's Papaya at 72nd & Amsterdam. Agent Tamara Bumdier went over to where Officers Wanda Menveaux and DePuis LeJour were posted in front of the Chase bank just below the Ansonia, one of the more ornate old buildings in the neighborhood. Basically, they had the place more or less surrounded: it would be very difficult for someone as large as Dr. Iobba Dhabbodhú was reported to be to slip through their efficiently executed net.

D'Arcy checked over the sheet of paper he'd been handed and took a deep breath before sauntering off toward the southeast entrance. Leahy-Hu was delighted to see such great cooperation between her ICA agents and the NYPD officers, seating herself discreetly on a bench by the subway station's entrance. There, she had a good view of much of the park before her. Detective Telly Ho stayed back in the van, coordinating things with ICA's dispatcher, Agent Aida Lott.

“Showtime,” Leahy-Hu said into her mic, “everybody's in place. Now – we just wait for the Big Guy.” She lit a cigarette and surveyed the scene with studied indifference.

Meanwhile, Detective Ho was trying to explain to Agent Lott the distribution of the various wireless headsets.

“You mean you can't remember which ones you assigned to which agents?” Lott was trying not to sound superior for all her organizational skills. “Who's on first?”

Ho checked his board. “Yes.”

Agent Lott was getting more and more annoyed. “Right, what's the agent's name with the first headset?”

“I'm not asking you who's on second!”

“No, I've already told you Watt's on second.”

“Would you tell me the name of the Agent you've assigned to the fourth headset?”

“Tamara.” He smiled – he had a soft spot for the beautiful Tamara Bumdier.

“No, I need to know it tonight! Who's on the fourth headset?”

“Hu's on first – How many times have I told you that?”

“Eidonneau's still on third: it's too late to switch.” He was getting irritated, now.

Leahy-Hu took a long slow drag from her cigarette, confident that everything was under control. She was still waiting for a call from [cryptographer] Haydn Plainview and hopefully Agent [Rhonda] Voo would be calling her soon from W.68th Street: they should have gotten there by now.

Labels: About The Lost Chord, novel