News from Haiti: One Month Later

This article – from an Episcopal Diocese on-line newsletter called EpiscopalLife Online – was posted last Friday, the one-month anniversary of the Earthquake in Haiti. Though I'd seen it then, I hadn't gotten around to posting it here along with other reports from Haiti in the month since the earthquake. 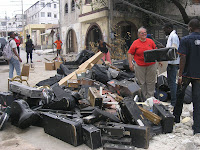 This photograph of Jeanne Pocius – for those of you new to these blog-posts here, a friend and former student of mine from the University of Connecticut – was taken by Eddy Alcindor of the Diocese of Haiti and shows her standing amidst a pile of retrieved music cases and instruments found in the rubble of the music school associated with the Cathedral Ste. Trinite in Port-au-Prince.

Mary Frances Schjonberg interviewed Jeanne for her article, speaking with her by phone from Port-au-Prince. After the February 5th Concert in BelAir (read a post here), members of the school's orchestra and the choral group Les petites chanteurs took part in a memorial service and concert on the 12th, in honor of those who had died in the quake. Another performance was going to take place the next day on the grounds of the cathedral's ruins. Given the extreme emergency of taking care of the survivors, the idea of rebuilding schools and churches at this time is impractical: with the rainy season on the way, housing is a major priority – living under a tarp is not the best way to be dealing with any impending hurricanes, in due season, either. Meanwhile, people try to find and salvage what they can: staying alive, however, is difficult enough.

Here, with more details than I'd posted before, is Jeanne's description of what happened on that day, a little over a month ago.

She was on the stage of the school's auditorium, the Salle Ste. Cecile (the main if not the only concert hall in the capital), getting ready for a jazz band rehearsal when the quake struck shortly before 5pm. She had just gotten up from the piano bench to pass out some sheet music when there was a “deep rumble.” At first, she thought the nearby construction work had caused the elementary school next door to collapse.

“Then the floor began bucking like an ocean in a hurricane. I remember shouting to the students to run. I sort of spun around in a circle, got down on my knees in the middle of the stage, put my head down and said 'OK, Lord, this is it. I am OK with that. You can take me home, thy will be done,' and I felt absolutely no fear.”

Then she tried getting out of the building, gathering up scared students along the way. She heard people walking on the auditorium's roof and found the director of the school, conductor Pere David Cesar, leading his staff to safety from their offices which had been on the 5th floor before the building collapsed. In another interview, considering how far they had fallen, he said they were surprised they were still alive.

Jeanne and four others helped lift a chunk of concrete off a child so the girl's father could pull her from the rubble. She had survived only because she had been cushioned by the body of one of the school's employees.

“I didn't lose control,” she continued, “until I got outside the gates and saw that the cathedral had collapsed.” She'd kept thinking they needed to get to the cathedral, then “everything would be okay, but it wasn't OK. Nothing was OK.”

Jeanne was injured – comparatively minor wounds, compared to what she saw around her – but she began to set up a makeshift field-hospital amidst the cathedral's ruins after scavenging up first-aid supplies and some over-the-counter pain killers. They were able to help about 300 people there, many with “absolutely heart-breaking injuries.” She improvised bandages from sanitary napkins and torn sheets just to cover peoples' wounds.

At the camp near College Ste. Pierre, not far from the cathedral where some 3,000 survivors continue to live, Jeanne has turned her attention to the children. She decided to start a school and as word got around she soon had about a hundred students gathering in a space that's about 25 square feet [sic – I suspect they mean “25 feet square”]. “It's been a little cacophonous,” she added with characteristic understatement.

At first, they just sang songs but eventually she was able to find paper and pens and crayons so the children could record “the stories of their lives and their survival.” One boy hoped his younger brother who'd died when their home collapsed was watching them from heaven. Another was hoping his family was looking for him: he didn't know if they'd survived.

Jeanne said “I am so proud of my students” from the music school. ”I have seen these young kids become adults overnight – some of them went out to [help] collect cadavers, they're helping clean the camp, they're helping me with the school.” The work they've been doing confirms her belief in “practical Christianity” as “[we] roll up our sleeves and get down to business. They're living their faith.”

In the past few days, Jeanne's had access to the internet and has posted some up-dates on Facebook and sent e-mails to her friends. Here are some of the links in the e-mail I'd received:

CNN's coverage of the “Haiti Concert for Hope” on February 5th.

A blog kept by Sister Sarah who'd been at Ste. Trinite before the quake: here, she's posted many before-and-after photos of the cathedral.

“...including this stonework divider to the right of the cathedral's altar.”

“This is what I saw when I exited the ruined school after the earthquake... and it broke my heart!”

An article in the Episcopal newsletter that talks about the refugee camps.

“A letter from our beloved Evecque (Bishop) Jean Zache Duracin.”

“Note the photos on the right of before/after”...the National Palace and the Cathedral Notre Dame “which is one block over from Holy Trinit, where I was teaching.”

(and these doctors didn't even arrive til after the worst injured had already died, still it describes a little of what I experienced the  night of and day after the quake...)

“The beautiful mural that was behind the altar at Ste. Trinite.”