The Power of Music, the Strength of Love: Haiti, Part 1

Two quotes immediately come to mind as I start this post: “If Music be the food of love, play on!” and “Music soothes the savage breast” (or beast, as it's usually misquoted). The first is from Shakespeare's “Twelfth Night,” the second though well known is from the relatively little known 17th Century dramatist William Congreve and his probably otherwise unknown play “The Mourning Bride.”

Music is capable of doing so many things: while for some, it is a luxury or something frivolous to be cut from budgets to save a few bucks, for others, it comes not far after the need for food, clothing and shelter.

In this post, I'm focusing on the power of music to transform lives. I'm thinking specifically of a former student of mine who has dedicated so much of her life to bringing music to the young students of Haiti, usually described (and dismissed) as the poorest nation in the Western Hemisphere.

With the earthquake there (usually described as devastating when no words exist to express the immensity of its impact on so poor a nation), survivors there have more immediate need of food, clothing and shelter – not to mention medicine – but they have music: people tweeting from the horrific scenes in Port-au-Prince, the capital, described people gathered in streets and squares singing in the night, mostly in prayer but also in comfort, singing of hope and banding together in an expression of the soul, both personal and communal.

Another favorite quote of mine, more recent than the Classics, comes from the acting teacher, Stella Adler:

“Life beats down and crushes the soul and art reminds you that you have one.”

So I want you to listen to this video clip before you continue to read. 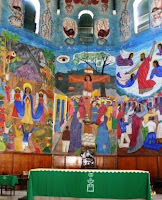 I had wanted to post the last movement of Haydn's Trumpet Concerto, a performance recorded on St. Cecelia's Day (the patron saint of music) this past November 22nd, 2009, at Ste. Trinite Cathedral of Port-au-Prince, a UNECO World Heritage site for its beautiful paintings of biblical scenes done in a classic Haitian primitive style (see image, left).

But it's only available on Jeanne's Facebook Profile/Videos: here is the link, if you'd have access to it.

Instead, I found this YouTube video of a rehearsal of the 1st Movement of the Haydn (better video, not as polished a performance and recorded in January, 2009, ten months before the other video) but it will still give you an idea of the importance of music in these students' lives! (Unfortunately, it cuts off about half-way through the movement...)

No, maybe it's not the most perfect performance I've ever heard but it's one of the most amazing and uplifting I've heard, when you consider everything going into it, if not just the joy these young students put into playing music by a White European composer who died 200 years ago.
- - - - - - -

- - - - - - -
The orchestra is conducted by a former student of mine, Jeanne Pocius, a trumpet player who'd been in my freshman theory class when I taught at the University of Connecticut back in the mid-70s. Her life has not been an easy one so it comes as no surprise to me the greater part of her life has been spent bringing the joy of music if not just the music itself to young people who've also led lives that are far from easy.

She spends much of her time recently teaching in Haiti. When not in Haiti, she is traveling around the country performing and teaching in brass clinics with schools and bands – and always raising money, calling for instruments to be donated to the schools in Haiti and above all raising awareness of the needs of these students and how important music is in bringing something positive to their lives.

Take the soloist in this performance. You will notice that he has lost an arm. Now, you can still play a trumpet with one arm: my grandfather, in fact, was well known in the area as “The One-Armed Trumpet Player,” not playing on the sympathy of the accident but for overcoming an adversity (my dad used to say his father had a closet full of band uniforms for different town bands all over the area; the story goes that, one year, he subbed in the Sousa Band, though I never remember my grandfather talking much less bragging about it).

The young man's name is either Dorve Carlot or Carlot Dorve (I've seen it in both orders, but his Facebook profile lists him as Dorve Carlot). He became an orphan during one of the many periods of civil strife that continue to plague Haiti almost as often as disasters like hurricanes and earthquakes have. I don't know if Jeanne adopted him or merely took him in, but she lists him as one of her children and he lists her as his parent on their profiles.

So you can see this young man's life has not been, shall we say, an easy one. 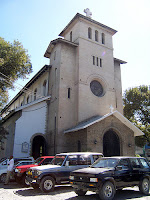 The orchestra consists of students from the school's music program associated with the Holy Trinity Episcopal Cathedral (or Ste. Trinite) in Port-au-Prince.

This (right) is the exterior of the cathedral (not to be confused with the Catholic cathedral as has happened with news photos being dispatched from the scene), taken before the quake.

The whole Ste. Trinite complex – cathedral, convent and school – no longer exists beyond piles of rubble, following the quake. Who knows how many of these students are even alive?

This (below) is the image from Google Earth of what, like much of Port-au-Prince, remains of Ste Trinite. 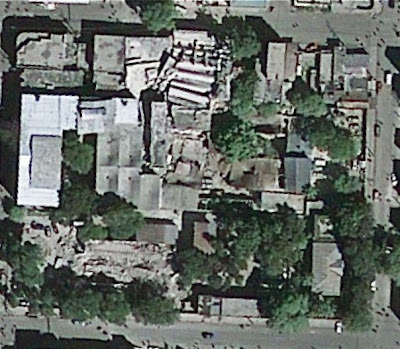 Now, go back and listen to that clip again – it's only five minutes long – and think about it from THAT context.

To be continued: hoping, waiting for good news among the tragic...
Posted by Dick Strawser at 12:48 PM