Haiti, Part 4: A Week After the Earthquake 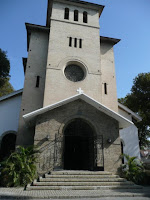 This afternoon, it will be one week since the earthquake struck Haiti. And yet, this past midnight, someone posted that a woman was still sending signals out from under the rubble of a school – Universite Caraïbe – on the edge of Port-au-Prince. She's still alive and there are others there still trapped with her! 6½ days – that is all at once amazing, miraculous and horrifying to contemplate! But they're alive. Let's hope someone can get to them and rescue them soon!

Meanwhile, it was reported in today's New York Times that the Red Cross has collected about $103,000,000 worth of pledges, $22,000,000 coming through the text-messaging program alone (sending the text "Haiti" to 90999 to contribute $10 to Haitian relief). After the National Football League's promotion during the game this past weekend, contributions were “coming in at the rate of $500,000 an hour.” That, too, is amazing. 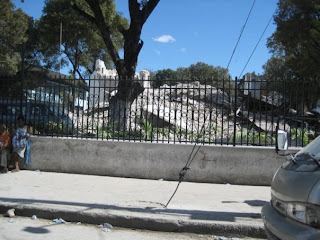 The work, of course, is far from over. I know after I had found out that my friend, Jeanne Pocius, who had been teaching that afternoon at the music school at Ste. Trinite, had been found and was alive, the urgency was in danger of wearing off. A week later, the situation is still dire – getting food and medical aid to the survivors has been hampered with the logistical nightmare of reality on the ground.

Someone from College St. Pierre, where Jeanne and many of the survivors from Ste. Trinite are staying – hundreds of people living on a soccer field – said Sunday night that food and water had still not reached them. Then later, someone else posted that they had received water “directly” on Sunday and food was expected to arrive sometime the next day – six days after the quake!

Phillippe Qualo sent photographs he had taken of various locations around Port-au-Prince which Olivier Vasquez posted on Facebook. Two of them I've posted here: Olivier was unable to reach Phillippe to ask him if he'd permit me to post them, so he suggested I go ahead but credit the photographer.

The first photo (top, left), found at a website about a nursing school in Port-au-Prince, is of the cathedral's main entrance taken before the quake. The second photo (on the right, above), taken by Phillippe, shows a view from the street of what is left of the Cathedral Ste. Trinite. (Other photos have been posted on Part 3 of this series of posts.)

Just to give you an idea of the extent of some of the damage – you've no doubt seen the miles and miles of indescribable destruction across the city in the TV news footage – consider the Catholic cathedral in Port-au-Prince, Notre Dame, a large, beautifully tropical-looking building of pink and cream with slender towers and a huge rosette of stained glass. This uncredited before shot (left) was found on-line. Phillippe's photo (below, right) shows what is left of the cathedral today. 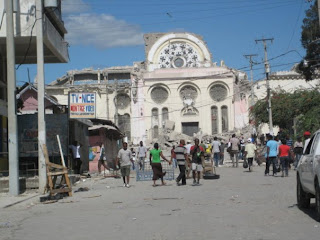 The next photo (below, left) is cropped from an Air Force Global Hawk unmanned aircraft photograph taken on Thursday, Jan. 14th, showing an aerial view of the cathedral's remains. There is also an interior shot of the cathedral posted at the Los Angeles Times which you can see here.

And there is much more to this earthquake than a few buildings being demolished and searching for a few friends. I have heard an estimated “body-count” of possibly 140,000 to 200,000 dead though an exact number will never be known, considering the numbers that are being quickly buried in mass graves without documentation or last rites. Families will never know for sure where their loved ones are buried: how many died without being able to say farewell? How many have died since then without the comfort of knowing their children will survive? What of the children who, unable to comprehend the horror of this event, will grow up with these memories such a major part of their lives? 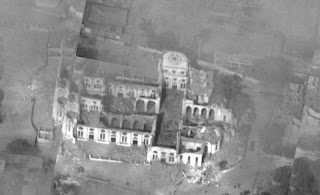 It is easy to sit back and smirk that – oh yeah – President George W. Bush who did such a fine job handling the aftermath of Hurricane Katrina is helping to spearhead the relief effort for Haiti, along with President Bill Clinton.

And of course, who could resist the “Pat Robertson Voodoo Doll” available on eBay as a fund-raiser for Haitian relief?

But every dollar is crucial, every person involved in contributing even a small amount is important.

If you haven't already, please consider using your cell-phone and texting “Haiti” to 90999 to give $10 to the Red Cross.

Or donate through the Catholic Relief Services.

There may have been controversies in the past with the Red Cross but, as people in the news have pointed out, this is a different time with a different administration, but they mention, somewhat disconcertingly, that they know they have to “prove themselves with this one” (as long as they've been around, why is there this need, today?!). There are several organizations that one could consider and you can find lists of them at many local news media websites. Or you can check out this link from "Charity Navigator."

Though be careful whom you're giving your money to. As always, there are those unscrupulous vermin who will prey on people's good intentions for their own gain.

Since I've been spending most of my time since hearing about the quake on Facebook -  Jeanne has a whole network of friends there and the people with the Haiti Music Schools Earthquake Info Sharing page have been incredible - several friends there have recommended contributing through “Food for the Poor” which is what I've decided to do. You can check out their web-site, or send a check to this land address:

People on Facebook have also been contributing "minutes" to cell-phones of the students at Ste. Trinite who are then calling locally to find out information about friends and family there. Word has gotten back to the page this way about many people that way, in fact surprisingly much good news about survivors, considering the devastation.

Still unable to hear from Jeanne directly, we've been relying on such reports:

On the day of the quake, Felix, one of the students there, told us that Jeanne's Big Band rehearsal was supposed to start at 5pm, just moments after the quake struck. Not everyone had arrived by then - those who were still outside were fine.

A few said they had seen her and another had talked to her: one mentioned her leg was "a lil bit fractured," which made us wonder if she had a broken leg or what?

Skander, a horn student at the school, mentioned "that she had given out all of her medicine" (typical!).

Another student reported that the school Dessaix-Baptiste in Jacmel on the southern coast of Haiti had received only minimal damage (this is the school where we originally thought Jeanne was at the time of the quake). He was able to chat on Facebook because the school had solar panels!

Another report mentioned that Jeanne had a band rehearsal Sunday night at the College St. Pierre! Now THERE'S a video I would love to see and hear posted on-line! In the midst of all this tragedy and misery with all the uncertainty of the situation, there is the healing power of music – both in the making of it and in the listening to it. Perhaps it IS an important aspect of sustenance for the survivors: not as critical as medicine, food and water as well as shelter, but for many something important and helpful.

In the near future, once the worst has passed, the rebuilding will begin – of lives and of the community but of the buildings as well, the schools and churches that have had such an important role in the life there. There will be a specific fund set up to rebuild Ste. Trinite – I'm thinking also how Jeanne used to ask for donations of musical instruments she could take down for the students there – and I will keep readers posted here about that in the future.

Though I know little about this school or its operations, I know that Jeanne is not the only teacher there. She is, however, the one I know. If all the other teachers there have the same kind of passion and dedication to their art and their students as she does, then it is a very lucky place indeed.

You can read more about the school and its history here, from fellow blogger Matthew Guerrieri in Boston. As he points out, "the Ecole Ste. Trinité became Haiti’s leading conservatory, the Orchestre Philharmonique Sainte Trinité the country’s de facto national symphony, and, upon its construction in 1979, the school’s Salle Ste. Cecile the city’s main concert hall."

Right now, all of this is physically gone.

The other night, I was sitting in my living room, feeling helpless after a newscast, watching the parade of faces looking out to the world for help, when I started thinking (beyond “where do you even begin?!”) how will they manage this when I remembered that performance of the Haydn trumpet concerto with Jeanne conducting the orchestra and Carlot Dorve playing the trumpet (it's on Facebook but I haven't been able to re-post it here: read Part 1 of these posts). It was held in Salle Ste. Cecile, the auditorium of the school named after the patron saint of music whose feast-day is November 22nd. The Haydn was recorded at the St. Cecilia Concert on Nov. 22nd, 2009.

In my mind, I heard the students of Ste. Trinite singing and playing an arrangement of the “Ode to Joy” from Beethoven's 9th Symphony – with its plea for Universal Brotherhood – if not before, at least on Nov. 22nd, 2010, whether they'd have a completed building by then, or not. Who knows, maybe before.

With your help and prayers, it can happen.