Remains of the Car 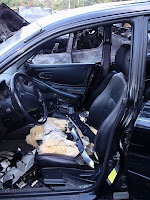 “Life comes at you fast,” they say: things happen when you least expect them.

There's also a commercial I've seen on TV – perhaps for an injury lawyer or maybe for a life insurance company - that shows a woman in a car's passenger seat, talking to someone off-camera, her back to the window, oblivious to the car suddenly speeding toward her to the imminent and unavoidable collision, the video clip cutting off dramatically at the point of impact.

That's pretty much what I saw on my way home Monday evening after dropping off a friend at his place. We'd been to the viewing for a former neighbor of ours when we'd lived in town, the victim of domestic violence. It was after 9:30 when I was heading south on Mushroom Hill Road, crossing Route 322 after waiting for the left-turn lane's light to change. It seemed to take forever: it was a long day – productive, since I was close to finishing the song, “Say 'Yes' Quickly,” with only three measures to go before the rough draft would be done – and I needed to stop at the store because I would be out of cat food by afternoon. Since the road crews might be working on paving Rt 83 that night and I wanted to avoid the hassle, I decided to take the back road and, once the light finally changed, pulled out across 322.

When I looked over at the passenger side window, I saw a red-and-white truck – higher-built and larger than a pick-up truck – barreling down on me. He clearly hadn't paid attention to the red light or to my pulling out into the intersection. There wasn't even time for an expletive, much less the decision to step on the gas when I felt and heard the impact, saw my windshield shatter and realized I was spinning.

I have no idea how much my car spun but I remember feeling nothing painful and how it all happened in slow motion. When I came to a stop with a thud, I was afraid I was going to be going down an embankment there and felt I needed to get out of the car as quickly as possible. Perhaps the gas tank would explode? I opened the car door, unclasped my seat-belt but then realized I didn't have the strength to move my legs. When I called out for help, I felt very weak and distant and thought “Maybe I'm having a heart attack?” or perhaps, in hindsight, “Is this what dying is like?” But after about 15-30 seconds, I was able to get out and stand up, getting my bearings despite the fact I had lost my glasses. I heard a woman shouting “don't let him get away, don't let him get away.” There was the red-and-white truck, pretty badly mangled, in the middle of the intersection.

If I was originally heading north - “toward 12:00” - then my car had stopped spinning, counter-clockwise (at least, that's what I thought at the time but as I've replayed this in my mind since then, I've realized I was spinning clockwise), I was pointed at 4:00. I was nowhere near the embankment. Then I realized what stopped me from spinning was the car behind me: I had slammed into her driver's-side door as she was headed north toward Mushroom Hill. She was the one who was yelling “Don't let him get away.” I figured his truck was so badly damaged, it didn't seem like he could.

Once I made sure she was all right and asked her if she could call the police, I went towards the truck which by this time had started to back up and turn down toward me. When I realized he was going to keep on going, I thought I'm not about to stand in front of him and just hope he stops. As he drifted past me, I saw a middle-aged man with a graying beard or goatee wearing what might have been a red flannel shirt and a work vest - though I'm not sure about that: the image conjured up a “hard-working man” - who was definitely not looking at me. His truck, its fender scraping against the wheel and parts of it dangling and clattering on the macadam, drifted slowly down the hill toward the Wal-Mart entrance. I ran after him trying to catch the license plate number but without my glasses, I couldn't see any of it clearly and figured he was moving faster than I could, anyway. 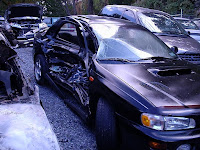 It had been a clear night but it looked like it had been raining, suddenly. No, not rain – maybe gasoline all over the intersection, all over my car? It didn't smell like gas, didn't look like antifreeze. Someone later said it was the truck's transmission fluid. I figured he wasn't going to get very far, not with all the damage to his truck. By the time I got around to see the passenger side of my car, I almost fainted: I'd already seen what it looked like from the inside, the empty seat scrunched into something barely a foot wide. If there had been someone with me, he would have been dead, most likely.

Several people came over to help. I remember at least two groups of young people – kids, I'd called them, though maybe college-aged or in their early-20s. Four of them had been over at the Turkey Hill Mini-Mart and ran over to see if we were okay, if we needed them to call the police. I told them thanks, but the woman in the other car had already done that. Then he said, “Is there anyone else you need to call?” and I thought, yes, I should call N before he falls asleep – he may not answer the phone if I call him later. Besides, I'll need a ride home.

At one point, just as the Swatara Township police started to arrive – three or four cars' worth – another group of kids who'd witnessed the accident came over and said they'd followed the truck when they realized he was getting away. “We got the license plate number” they said proudly and she handed it to me though without my glasses I could barely read it. She said they'd followed him into the parking lot at Verdelli's where he'd pulled off the road, about a mile away from the accident. I asked her instead to give it to the policeman standing a few yards away. I hope I remembered to thank them for their kindness as well as courage, but I think in the commotion and all the distractions, I didn't and didn't see them again, either.

Following the routine, I got out my license and found my insurance card which took a little time to find in the mess – meanwhile, one of the guys there found my glasses neatly folded in the back seat – and I noticed that while neither of the air-bags had deployed (because it was a broadside collision?), the CD player was still playing and hadn't even skipped a cut! I had been listening to Elliott Carter's “Dialogues” for Piano & Orchestra – I never listen to the radio any more – and it was still playing as the police had arrived.

It turned out I was bleeding a little, a small cut on my forehead and in front of my right ear, just below the ear-piece of my glasses. Considering what could have happened, it wasn't much. In fact, it had stopped bleeding by then, barely noticeable. I kept pressing against my chest which felt tight – muscle-strain, nothing more? Nothing seemed to be broken or fractured, no pain – I hadn't hit the steering wheel because of the seat-belt. Other than feeling a little dazed and shook-up (I remember joking with one of the kids “well, I feel a little verklempt, you know?” and they laughed), I was fine. After N got there, one of firemen, who'd just gotten there, too, asked me if I wanted them to call an ambulance, if I should go into the Emergency Room for anything, no back pain or neck pain – no, no, I didn't feel anything like that, in fact nothing really at all, though we joked that I will feel differently in the morning. It would be impossible, being 60, now, not to feel something after the thrashing I'd gotten during the impact and then spinning around like that.

It was strange, too, to feel glass inside my left shoe and, even more strange, under my upper denture! How did it get there?!

The woman whose car I'd landed against – her driver's door was bashed in but I couldn't see any scratch on the back bumper of my car - had to crawl over the console to get out the passenger side: other than being shook up, she said she was okay, too, lighting a cigarette to calm herself down as we talked to the police. The officer went over the details, told us what we'd need to do, calling our insurance agents, how the police would prepare the reports they'd mail to us and which we'd then send in to the insurance companies. He gave us his card and told us the name of the officer who'd be handling the investigation with the hit-and-run driver who would now be facing, among other violations, “leaving the scene of an accident.” Then the policeman said “Oh, they found there were warrants out for his arrest, so they just took him straight to jail.” No wonder he didn't want to hang around... 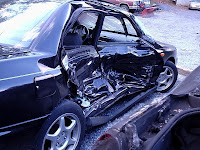 The firemen cleaned up the place, sweeping up the debris from my car, spreading sand over the fluid on the road, then the tow-truck arrived and hauled what was left of my car up onto the flat-bed. It was then I realized, having been laid-off and unable to find work the past year, that now, with no income I was going to have to buy a car: the insurance wasn't likely to pay to replace it, especially since it was unlikely the guy who hit me even had insurance. Add to the muscle aches a sinking feeling in the pit of my stomach: this is not what I needed, now. Whether the guy had been drinking or was on his cell-phone, maybe texting – I have no idea – but this was not going to be what he needed, either: things were going to be very different for both of us, but at least, speaking for myself, I was alive. And that was enough for me.

These photographs of my car were taken the next afternoon at the tow-truck's storage area. My car looked bad enough and I still marvel that I walked away from it with only a scratch or two – God and His angels looking after me, or what – but then I saw the burned-out skeleton of a car next to mine, one that had clearly rolled over, judging from the clumps of dirt and grass ground into its shattered roof-line, and was amazed that anyone could have survived that one at all. It all happens so quickly, doesn't it?