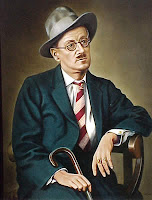 “Stately, plump Buck Mulligan came from the stairhead, bearing a bowl of lather on which a mirror and a razor lay crossed. A yellow dressinggown, ungirdled, was sustained gently behind him by the mild morning air. He held the bowl aloft and intoned:

And so began the original Bloomsday, June 16th, 1904. Today, it's being celebrated in Dublin in grand style, economy-be-damned:

y hooley involves devoted Joyceans dressing in the fashions of 1904, eating the ‘inner organs of beasts and fowls,’ attending readings and celebrating at various venues and pubs mentioned in the book."
- - - - -

Every Bloomsday, I try to read a few more pages in my life-long bookcrawl through the 783 pages of my current edition of James Joyce’s epic

novel, Ulysses, which describes a day in the life of Leopold Bloom and his travels through Dublin during the course of one spring day in 1904. Last Bloomsday, I made it to p.399 and then blogged about it here.

I’m not sure how far I’ll get today, but it is a good day for reading, cool and overcast. I'll pass on the dietary associations, though...

Below an uncredited portrait of the author are photos of a Dublin Celebration (during the Centennial celebration in 2004?), perhaps one of the largest bar-hops in the world, and a James Joyce re-enactor from 2003.

You can read Joyce's Ulysses on-line courtesy of the Gutenberg Project.