The Rite of Marmot at the Punxsutawney Phil 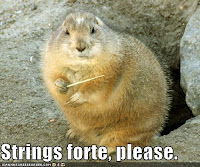 So what will be on the program for the Candlemas Concert with the Punxsutawney Philharmonic today?

Will the conductor come out of the dressing room and see his shadow?

Will they be playing Frank Bridge's symphonic poem, Enter Spring? Or will we get six more weeks of Vivaldi's "Winter" from the Four Seasons?

And will the groundhog see his shadow during the final scene from the Greater Punxsutawney Ballet's annual production of The Rite of Spring?

(By the way, if you've never seen it before, you can watch the Joffrey Ballet's reconstruction of the original 1913 Nijinsky choreography of Stravinsky's ballet: Part 1 - Part 2 (end of Act I and start of Act II) - Part 3 (conclusion). Small wonder there was a riot at the first performance!)

Will there be a riot at sunrise today?

UPDATE: Punxsutawney Phil, complaining about being unable to sleep with all the partying going on from Steelers fans, has seen his shadow.

And LowPax Louie, the resident rodent in my back yard, sends greetings from Cancun.