Mahler Goes to the Farm Show! 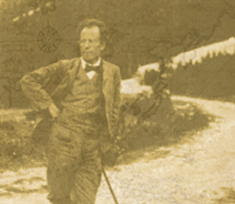 Saturday marks the opening of the annual “Farm Show” which, in Central Pennsylvania, means two things – the largest agricultural exposition in the nearby universe and the arrival of typically bad winter weather, usually of the more-so-than-usual variety. For those who enjoy it, that means a delight; for those who do not, it means anything from an annoyance to another reason to go back into hibernation and wait for the groundhog.

Not that every Farm Show brings bad weather. And not every prediction comes true. There was a huge blizzard that was going to sock the midstate with more than a foot of snow one January a few years back prompting Market Square Concerts to postpone a Saturday concert only to have not a single snow-flake fall within a 20-mile radius of Harrisburg.

UPDATE: for this storm, Channel 27's weather center is predicting 3-6" in the immediate Harrisburg area.

Further Update (as of Saturday morning 8:30am): The way the storm is tracking, they're now calling for 1-3" in the Harrisburg area mixed with sleet, 3-6" for areas north and west.

So how will this affect the audience for the Harrisburg Symphony this weekend?

I suspect some people, after they get back from ransacking the local grocery stores for bread and milk, will be calling to see if the concert will be rescheduled – the answer is no.

If this is a serious concern for you, you may want to see about exchanging tickets for Sunday afternoon’s performance. Things should clear up by then: better than missing it completely.

Yesterday, I attended two rehearsals with Stuart Malina conducting the orchestra in Gustav Mahler’s 9th Symphony. All I can say is, it’s going to be an exciting performance! This is, admittedly, a very difficult piece to play well but there were things going on in this first run-through that were as good or even better than in some of the recordings I have.

At the end of the evening’s rehearsal, after going through the emotionally intense and physically exhausting last movement, the greatest of the farewells in this symphony of farewells, Stuart walked over to me, beaming, with his trade-mark “Am I the luckiest guy in the world, or what?!” The orchestra is playing fantastically and they are responding to him with enthusiasm that would make conductors of many major orchestras envious.

I’ll be doing the pre-concert talks an hour before each performance – the concerts are at 8 on Saturday and 3 on Sunday at the Forum in downtown Harrisburg. Let’s all think positive thoughts and send the snow further north...