It’s now official: I am no longer a mid-town resident. I have survived the move and various other non-related events from that week – all but the unpacking which has yet, officially, to begin. I spent Thanksgiving, thankfully, all under one roof.

It was a timely move: having worked on the clean-up phase this past weekend until almost 10pm, I began feeling uncomfortable carrying odds and ends out to the car parked in front of my old apartment. Monday, then, when I went in to finish up, I heard that one of my neighbors, a resident of almost forty years there, had been mugged at gunpoint, walking back to his house after parking the car around 10:30 the night before.

For those readers outside the immediate vicinity of Central Pennsylvania, it has been a strange autumn here: the third week of November and many trees still had their leaves, and many of them still hadn’t changed yet. It has been autumnally cool but not really cold, only a brief encounter with measurable snow.

One of the things my grandfather always said: the date of the first measurable snow will indicate the number of measurable snowfalls that winter. I’d never really kept track of it since it sounded so odd for a scientific man like him who kept meticulous records to say that: one year not too long ago, with the first snow on December 4th, we had five measurable snows, so that wasn’t bad, but one of them as I recall was a 12" blizzard. Last year, we waited until I believe January 21st for the first official snowfall and we only had a few snowfalls, though the storm around Valentine’s Day was one to remember! So I cringe thinking “what if 18 is the correct number this year?” I think I’ll keep track of them on the kitchen calendar this time. 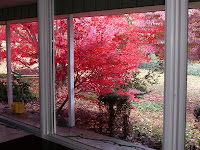 Several years ago, my mother had gotten, with the best intentions, some exercise equipment. While I stood there in my senior moment calling it first a “walker” (no, that’s for later), then a “stroller” (no, that’s at the other end of the cycle), the word finally came to me: “treadmill.” I know she had used it for a while, but living alone she was always concerned it would suddenly kick itself into highspeed and she would be stuck on it, going 40mph, hanging on for dear life and unable to step off the machine. This past weekend, I discovered that not only was it still plugged in back in its corner of the living room, it still worked. So I have started using it myself, set at a leisurely pace to accommodate the still aching pulled abdominal muscle, sneaking my way gradually into a routine of 10-15 minutes a day (it’s a start). The photograph above, taken a few days ago, is the view from that corner, so it was, at least for a couple days, a rather pleasant way to spend a few minutes.

I have also gotten back into the routine of putting seed out in the bird feeder, a simple squirrel-accesible affair nailed to a post on the back porch. 25 years ago, we would have sparrows and purple finches by the busload but today, other than the occasional white-crowned sparrow, most of the clientele are tufted titmice, chickadees, juncos, once in a while the Carolina wrens along with infrequent visits from cardinals and blue jays. And of course, the squirrels and chipmunks.

In the past two days, I have also seen a red-bellied woodpecker (so named despite the fact the red is on the cap and back of its neck, but not on the belly – not that they would call it the red-necked woodpecker – just enough to distinguish it from the red-headed woodpecker with its full head of red). Once in a while, there’ll be a downy woodpecker in the Japanese maple, maybe a flicker, once a meadowlark. In the front yard which is more open and meadow-like, there are birds I never see in the back yard: the bluebirds have probably left for the winter but yesterday I watched a family of white-breasted nut-hatches in the one tree out front.

But it was windy on Thanksgiving Day despite temperatures flirting with the 60s, so now most of the leaves have dropped, including the Japanese maple in the photo above, now an array of bare branches over a carpeting of dark red mulch. Still, looking out at night, seeing it in the light of the full moon is still a beautiful sight.

The kittens have turned 7 months old this week and it will soon be time to take the lone female, Blanche, in to be spayed. Their mother, the ever-elusive Frieda, has begun putting on weight but more uniformly than before: perhaps it’s just an indication she’s getting enough to eat rather than, having been spayed over the summer, that she’s discovered a secret uterus somewhere. I rather doubt I could coax her into joining me for a stroll on the treadmill.

And I am getting back to composing after being interrupted these past two weeks with the move and its follow-up: several hours were spent Thursday trying to figure out where I’d left off and how it should continue from there. I’m not convinced yet I’ve found the best solution.