With a few days before Christmas, composition has slowed down considerably, unfortunately, now that I’m back to work, but I managed to finish one layer of the opening section of this “Christmas Project” of mine I’ve been posting about, otherwise known generically as “A Christmas Story” for lack of a better working title (see previous two posts). There’s a narration (sung by a tenor soloist) which is one line, and there’s the voice of the angel (sung by a high soprano soloist) which is another line that leads into a setting of the Ave Maria (sung by a three-part men’s chorus) which then continues as other lines and layers resume or begin: there will be a mezzo-soprano solo singing a verse of the Magnificat which will overlap with a chant-like setting of another verse of the Magnificat in the women’s voices. These weave in and out of each other in the course of this “Advent” section I've been working on.

Here, basically, is the “Ave Maria” written out as best I could manage without spending lots of time in this notepad software I’m trying out just for examples on the blog. Here’s the first verse which opens with the chant-like “incipit” sung by tenors: 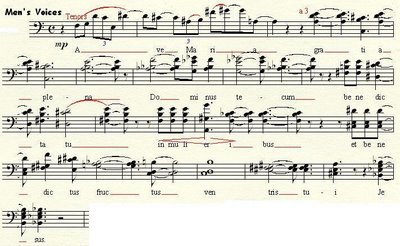 Here’s the second verse which opens with a comparable “incipit” sung by baritones:

Though it’s not part of the Ave Maria text, I close the section with the men singing the Doxology, which essentially becomes the second half of Verse 2:

In this sense, it becomes (musically) a two-part form but with slight alterations between the first and second parts, primarily in the final cadence.

The whole thing uses three hexachords: 6-8 (which is the Angel’s six-note ‘set’ of pitches), 6-20 (which is associated with God or heaven) and 6-30 (with earthly or human associations). The chords are not, basically, standard triads but combinations of pitches that mix major and minor 2nds and more open intervals like 4ths and 5ths (the occasional tritone or augmented 4th), with less prominent major or minor 3rds, differently than one hears them in a standard major or minor triad. So it comes as a surprise to hear – at the end of each part – a progression of standard triads, but not exactly in a standard progression. The first verse cadences from an A Major to an E-flat Major triad. In the Doxology, on the words “Holy Ghost,” what should be A Major to E-flat like the first verse becomes a deceptive resolution from A Major to F Minor (from the set, 6-20), extending the phrase which then ends with a progression of four chords: B Minor to F Minor, A Major now resolving to E-flat Major, each pair of chords a worldly tritone apart and each pair the complement of the other – in all, a progression of four chords consisting of all 12 chromatic notes of the scale.

These three segments are placed to fit into the overall structure of the other layers: together, they make the whole, but the Ave Maria, for example, exists individually as a complete unit in itself. If counterpoint is the juxtaposition of melodic lines against each other to create (vertical) harmony out of their (linear) melodies, I’m doing the same thing here but with complete little pieces.

I had done this, on a more complex scale, thirty years ago when I was teaching at the University of Connecticut and writing a piece for the excellent choir we had there. Called “Whispers of Heavenly Death,” it set two different texts in three different languages and styles: and it was also spaced around the auditorium. On stage were the women’s voices singing a rather English (quasi-Britten) style setting of the Nunc dimittis in English with two soprano soloists who sang lines from Walt Whitman. In the stage-left balcony was a small madrigal choir singing the Nunc dimittis in Latin (but with changing meters and independent of the choir on stage). In the stage-right balcony was the men’s choir singing the Nunc dimittis in Russian in a style more similar to Penderecki in the 1970s: not only was it stylistically independent of the others, it was in a wholly different tempo! Along with this was a brass quintet and a vibraphone: the vibraphone was on stage with the two soloists and the horn on stage with the women’s choir, but the tenor trombone was up with the madrigal choir on the left and the bass trombone with the men on the right. At the very end, the two trumpets came in from the very back of the hall for the benediction.

Not only was it a polyphonic piece with different layers (instead of just lines) moving independently, it was a poly-stylistic and poly-temporal piece that required three conductors. As complex as it sounds, it all fit together very well and sounded great (though I only heard it from my place, conducting the men’s choir in the balcony: I was the only one who could conduct 1/4 note = 45 against the main conductor’s 1/4 note = 60). More amazing, to me, was the fact that on that Thanksgiving morning back in 1976, I had a vague idea of what I wanted to do but not sure how to go about it: by dinner time that evening, the entire piece was complete! So it’s annoying to realize now I’m trying to work out something infinitely simpler but it’s taking several weeks just to get started and who knows how long to complete! (Ah, those were the days, my friend...)

This new piece, however, is nowhere near as complicated as all that: everything works comfortably for one conductor: anything that might sound like it’s a different tempo will be written out in the general one-conductor tempo. And in two weeks, I have about 2 minutes of it done. But at least, it’s a start. Now we’ll see whether I get any more done as Christmas comes and, eventually, goes...
Posted by Dick Strawser at 12:30 PM