987 Words About Winter, Few of Them Good 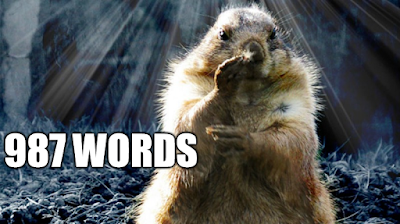 It's not that I hate winter: it's just I have few reasons to like it. But now that Groundhog Day is past, it feels like the season is, at best, half-over. The only reason I would hesitate wishing for an early Spring is because that means next Winter will get here all that much sooner. Technically, Winter begins, astronomically speaking, with the Winter Solstice in mid-December, though weathermen have decided, for ease of record-keeping, that it begins on December 1st and consists of three months: December, January, and February.

But since Man invented the calendar as a matter of convenience, it should be pointed out Mother Nature – or whatever deity you wish to invoke in Nature's name – doesn't give a fig for convenience. Last year, the Winter Solstice was December 21st; this year, the Spring Equinox will be March 19th (though at 11:50pm EDT).

It's perfectly logical those people who deny scientific evidence supporting the dangers of Climate Change would prefer folksy predictions fabricated from the habits of a rodent who happens to wake up on February 2nd. (It's enough of a challenge explaining the scientific basis for the Change of Seasons to someone convinced the Earth is flat.)

Another problem for many of us northerners is realizing that, in Australia, Christmas is the peak of the summer holiday season. (This may be something else Flat Earthers have difficulty explaining, but I digress.)

It's surprising how close ancient astronomers were to figuring out so much about the Earth and the Heavens, lacking "modern technology," creating a primitive 12-month lunar calendar at the end of the Stone Age. Yet look at Stonehenge on the Winter Solstice's sunrise to wonder how they could have figured it out, everything perfectly aligned.

Whatever Prehistoric Mankind needed was dependent on weather, knowing when they had to store food or else starve during the cold. They needed to know when warmth might return, always afraid maybe it wouldn't.

Over the millennia, certain corrections and adjustments had to be made: witness the inclusion of Leap Day once again this year. The lunar calendar proved ineffective for agriculture; the solar one was more efficient. Dividing time into years and months was one thing, but days and minutes were another. A watch was merely a convenience.

According to the Christian calendar, not codified until the 4th Century A.D., forty days after Christmas (the birth of Christ set opposite the pagan winter festival, Saturnalia) came 'The Purification of the Virgin' or the 'Presentation of Jesus in the Temple,' as required by law, placing it on February 2nd opposite another pagan festival, Imbolc. On February 1st, ewes were purified by being driven through hoops of flame, receiving the protection of Brigit, goddess of fertility. February began with ancient Romans carrying torches through the streets, fending off evil.

Around 600, when the Pope established the festival on February 2nd known as Candlemas, he knowingly combined these two ancient observances but the celebration became one more about light than with fire and frenzy. If Christ was "the Light of the World," the priests then blessed the candles to be used in the coming year.

Instead of Romans and evil spirits, parishioners now lit candles and processed home with them, symbolically taking the Light of the World home in the midst of the darkest, most hopeless days of Winter. Instead of sheep, the badger (the gentle European version, not the snarling American beast) might see its shadow and resume hibernating.

When Germans came to America, bringing along their folksy customs, they found no badgers for Candlemas, but they did see groundhogs. On a cloudy day (with no shadow), the worst of winter was past.

The summer solstice is also called “Midsummer's Day” (or, in Shakespeare, “Night”) with all those celebrations held over from pagan days; and one of my favorite English Christmas carols is “In the Bleak Midwinter.” How can the observances for the start of summer and winter be Midsummer and Midwinter, and all at the same time?

Originally, the solstice marked "the extreme" of summer or winter, the sun's farthest point in the sky before it turned back. These were balanced by the Spring and Autumn equinoxes, equal darkness and daylight.

We approach the start of Summer, aware the days are 'getting longer'; we complain the days get shorter as Winter arrives. But it wasn't until I was reading Thomas Mann's Magic Mountain when I was in my mid-30s I realized Summer's start marks the gradually increasing loss of daylight, the inexorable decline into Winter's darkness.

The older I get – speaking of a metaphor for one's declining final years – the more time itself, however you measure it, feels like it's gone into fast forward and I can't find the remote. Except during the dreariest days of Winter when time comes to a standstill and it feels like Spring will never come.

Today's political climate doesn't help much, either, thrusting us back into another Dark Age where science, logic, even decency are ignored. It's the perfect time to watch the groundhog, hoping Spring, metaphorically, arrives early.

One who's constantly reading, I rarely go out without a book in hand, though more to ward off intruders by opening it to show any approaching extrovert, “See, I'm busy; please don't bother me.” There's nothing more pleasant on a winter night than snuggling with the cats to catch up on some great, fat novel.

Perhaps it will be an entertaining mystery or maybe a thriller, but often it's time to pick up something more challenging. Too often, I find epic Russian novels don't always help the winter doldrums.

Right now, I have only 50 pages to go in my second reading of Thomas Mann's Magic Mountain, challenging my concentration. Meanwhile, I'm also finding myself eager to finish my Piano Quintet (so close...).

Unfortunately, these weekly posts, intended as an incentive to keep writing, have become a major distraction, regardless what the groundhog says.