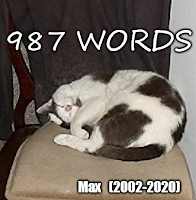 Max was my almost-18-year-old cat, a stray I'd taken in off my porch when he was seven or eight months old. At almost-18, he was the equivalent of an 80-year-old human who's grown frail and had several “life-style challenges” to deal with. He could still get around, walking stiffly, up until a few days before he died, not that cats can use canes. In the end, he became totally bedridden only in his last two days.

After a November examination, his veterinarian confirmed some of Max's issues included a heart murmur and the start of kidney failure, not uncommon in “senior cats,” but not something that necessarily proved immediately worrisome. Max could live a few more years before kidney failure might prove fatal. His liver was good, no signs of diabetes.

But it was what wasn't showing up in his tests that worried me. In September, one of the five kittens whose mother I took in two days before they were born, died of cancer. Freddie was 12 years old by then, but that was not yet “old,” my first cat to be diagnosed with cancer.

Yes, Max could also have “something going on” in his intestines which may account for the weight loss over previous months. Whatever it was, at his age treatment much less surgery was too risky.

There's an expression I've heard used lately when someone is diagnosed with something like an advanced stage of cancer, often terminal. There are many variables, given the disease, dependent on age and life-style, but also on strength and the will to fight. As one friend said, “I just know now what will probably kill me.”

True, philosophically, every day we are one day closer to dying, whenever that may occur, but there's also a difference between this “nearing the end of life” and the gradual process of leaving it.

I was saying the same thing about Max, then, “nearing the end of life,” not knowing how long he might live.

A week before Christmas, something happened to Max, I'm not sure what: I thought he wouldn't make it through the night. Then, by morning, after I'd sat up with him, he seemed to stabilize. Twice before, there were sudden changes like that, like a cat shedding another of his nine lives, but he always recovered. Since November, these started happening more frequently, when after a bad night (and often on a weekend) he would come back to only about half what he'd been before, like he would fade away.

So I had to go from “Max was nearing the end of life” to “Max is dying.” It was only inevitable. After all, he was pushing 18: I knew it had to come eventually. Would he make it to Christmas? He did. The New Year? He did. His 18th birthday in April? Well, we'll see...

So now, we moved into hospice care and I was his 24/7 care-giver. If he needed held or wanted to curl up on my lap, that was more important than my doing any composing. He'd stretch out across my chest, purring away, cradled in my arms, while I sat at the computer, trying to write.

I didn't want to have him “put to sleep,” not while he's still fully conscious and could still enjoy my company. By Friday, there was so little of him left, the decision was inescapable.

It's strange to find the place so lonely, coming back from the vets. The loss of a pet, no matter how old, doesn't end with holding him in your arms as he passes on. I walk around the house, seeing the places where I used to see him, his favorite haunts, his waiting food bowl. Everything, especially the chair we'd spend so much time in, him curled up on my chest, is full of his absence. The other cats aren't sure what's happened, maybe, but they sense something has.

I wonder if they know he's gone – 'gone' like we use the euphemism? They're not wandering around trying to find him, looking under the tea-caddy, wondering why he's not coming to dinner any more. They spent time with him those final weeks, sleeping beside him, sitting nearby. Whether they understand Death, surely they must “know”?

There are four cats in the house, Max's “cousins,” I think of them. When Freddie died, he left behind his brothers Abel, Baker, and Charlie – initially indistinguishable orange tabbies – and sister Blanche, a tortoiseshell. They had been born in my bathroom almost thirteen years ago, now, growing up with Uncle Max whom they never challenged.

The night before Max died, they all sat quietly on the bed and took turns gently licking him on the forehead. It was like they'd all come to say good-bye, one last loving act.

Maybe cats don't believe in the Legend of the Rainbow Bridge, the meadow where our pets wait for us after they die, eventually to be reunited as we cross over the bridge into Heaven. Perhaps there's an old song cats sing to each other to comfort themselves when they cannot understand the world around them?

“Good night, sweet cat,” I imagine it goes, “now it's time for sleep:
Don't worry about the things to do tomorrow.”
(The song continues gently, soothing.)
“But now let's sleep, and you can dream.”

For me, I'm glad I'd looked out on my freezing cold porch at that moment over seventeen years ago and decided, “That cat looks like it needs to be brought inside where it's warm.”

I thought of all the warmth he'd returned to me over those years, holding him in my arms, and said good-bye.