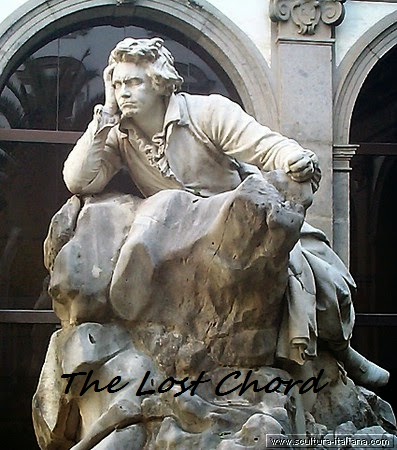 In the previous installment, Klavdia Klangfarben, absorbing her new identity, a woman who fancies herself a German countess, decides she might write her life-story (as a novel, of course) and goes in search of an agent. She contacts Iobba Dhabbodhú and discovers he knows Dr. T. Richard Kerr. The plot thickens. Dr. Kerr is being interrogated by Tr'iTone who explains Cameron is tied into a bio-feedback loop of Ravel's Bolero when a cell phone rings and Kerr has yet another unwanted epiphany.

There wasn't much she could tell him, just because she's Rob's cousin. LauraLynn looked around at everyone intently watching her. She had no idea who they were or why she was there. The man in the suit asking the questions must be the boss, the other people there merely his minions.

"So, look," the boss was saying as he leisurely sipped his drink, "I can't imagine that you know nothing."

"He was very secretive about whatever he composed," she explained, "always was."

The man in the suit looked like an American used car salesman, someone she should trust about as much. The skinny guy with a shock of purple-green hair was clearly annoyed. There were bodyguards standing at the door, no doubt armed and dangerous. The dowdy woman must be a secretary.

"Okay," she said, "I know you guys are after my great-grandfather's journal, though I can't think of any reason why. Most of it's in code and it makes no sense to me."

Furrowed brows and confused glances were fleetingly exchanged between boss and secretary, even to the now more annoyed punk-rocker.

"You can have the journal if you'll just let me go free, but Dr. Kerr still has the statue." She hoped Terry would forgive her, whatever true value both objects had.

"What journal...? and what d'you mean, statue?" Steele was becoming increasingly annoyed. "Anybody mention a journal and statue before...?"

One of the guards yanked her purse away and produced the journal.

"You forget, Ms. Harty, that we have both you and your journal. Not much of a bargaining chip, then."

Steele impatiently flipped through the old journal the guard had handed him before tossing it onto the end table. Scricci picked it up but dropped it like it burned his fingers.

"What I want to know is if your cousin left any back-up copies of his completed opera lying around."

After a knock at the door, a guard conferred with the boss before leaving the big guy back in.

Widor, breathing heavily as usual, looked around uneasily, hoping no one heard yet about his new bike having been stolen, and explained he'd just talked with their inside agent at Schweinwald Security. "It seems this Professor Kerr person who's a friend of Robertson Sullivan's was brought in to complete his opera."

"Okay, well, that's a game-changer," Steele said, kicking against the nearest chair. "If he knows about the reworked ending, this Kerr fellow must also be eliminated, if you get my drift."

Steele decided Widor should call Kerr again, this time offering to give him LauraLynn in exchange for that statue, luring him into their trap somewhere not too far from the Festspielhaus.

Once again, Widor tapped in the number, expecting to reach LauraLynn's phone but genuinely surprised somebody else had answered.

LauraLynn realized Terry was in even greater danger, whatever he'd been before, and not because he can't locate a fountain. Whether or not Rob finished the opera, Terry could technically re-complete it.

Plus this guy knows nothing about either the statue or the journal: so who, she wondered, was the killer?

Her mind began to swirl with possibilities, if that guy wasn't Dhabbodhú. And if he wasn't, who was he?

Whoever the real killer was, was Rob's murder maybe about something else?

Totally cool with vampires and werewolves in the movies and graphic novels forming the cultural core of her Goth experience, Fictitia found she was less comfortable with them in the real world, or at least the very real likelihood of running into them while she's hanging out around some haunted castle. Whatever was going on there tonight was different from the stories that entertained a bunch of terminally bored misfits. That old perv Scarpia had disappeared first, then she'd heard Cameron scream.

"Thank goddess they'd given back my phone," she puffed into the wind, racing through the woods back to safety. Maybe someone was still monitoring her Twitter account and could send help. She didn't relish the idea of dealing with those creepy police again but it beat battling monsters by herself.

She felt badly she hadn't said anything to the police about Scarpia, figuring he deserved whatever he might have gotten, but then she hadn't had a chance, kidnapped in that bomb-maker's van. Strange things had been happening so fast, she had trouble keeping up, even for someone used to instant reporting.

And the old guy with Cameron, was that his grandfather or something? But what were they doing out there? Scarpia had been stalking her, she knew, and she'd followed that beast...

The road was pitch dark so she couldn't see what she hit, taking that bend down the hill too fast – maybe a rock or some rodent that darted in front of her. She found herself airborne, not the normal way she liked flying high, landing with a thud on her back.

"Shit, piss and fucking corruption," she shouted at no one in particular. Everything around her was very still. "Spooky..."

She found her phone and used the light to find her bike.

"Aw, crap," she said, kicking the dirt before realizing she felt okay, no broken bones or big, gaping wounds. The tire, on the other hand, was flat and the wheel, mangled.

Now she'd have to walk, she thought.

Then she saw approaching headlights.

The car slowed to a stop.

"Who the hell's this?" the gruff voice on the other end of the line blurted out after a brief silence.

"I was expecting Professor Kerr," Widor said, his breath slow and heavy.

"Yeah?" But the gruff voice that answered the phone offered nothing else.

But rather than hang up, the gruff voice continued to wait quietly as Widor's patience began to grow thin.

"So who the hell's this, then? Dr. Kerr's personal assistant?" Widor laughed.

"You have reached the phone of Professor Kerr," the gruff voice said, "but he's tied up at the moment."

Whoever it was, Widor thought, did a poor impersonation of a secretary.

In the distance, Widor heard Kerr's voice. "Well, technically, it's not my..."

"Shut up," the gruff voice growled.

Widor quickly realized the situation: wherever Dr. Kerr was, was now immaterial. The circumstances required a sudden change of plans. If he's going to negotiate, he must first talk to Kerr's captor.

There was silence on the other end.

Widor leaned into the phone. "We have LauraLynn Harty... and her journal."

He heard a sharp intake of breath.

Widor leaned back with a faint smile.

If anything, LauraLynn thought it made him look grotesque, even more evil.

"Then perhaps," Widor continued slowly, "we could arrange an exchange between us?"

Scricci slapped her violently, then gagged her. "Honestly, boss, I just couldn't take the bitch any more," he apologized.

Steele, nodding his approval, urged Widor to hurry up: "It's getting late."

"I understand you plan to blow up the Festspielhaus tomorrow," Widor added.

"We might have different goals, but if we could combine our resources...?"

Widor suggested meeting to discuss the details and trade their respective items.

Klavdia Klangfarben – or rather Countess Falkenstein (she'd long been considering dropping her other names) – sat in her elegant Manhattan brownstone, savoring thoughts of her revenge on her old enemy, Dr. Richard Kerr. She had succeeded in stealing Cameron's letter and even now Dr. Dhabbodhú was probably taunting him with its loss. This called for another glass of that wonderfully sparkling, vintage Riesling wine she'd found cases of in the basement. Smiling, she had to admit, "it doesn't get any better than this."

It had been a piece of cake, Roth hacking into Cameron's computer, locating the bank and his account number. Even better, they discovered that the Pierce family's designated lawyer was out-of-town. Dhabbodhú then arranged for a late-afternoon appointment so Cameron's own "lawyer" could retrieve a document from his safe-deposit box.

Too bad Dhabbodhú had to leave early for that conference in Germany, but then she got to play 'the lawyer.' Once she had the letter, she would pass it on to Roth. Taking the next flight out, then Roth would relay it to Dhabbodhú. All in all, what could go wrong?

The night before he left, she and Dhabbodhú celebrated their plan's success with an unexpected tumble onto her couch.

She couldn't remember when she'd last been possessed by such a man.

The novel, The Lost Chord, is a classical music appreciation comedy thriller completed in 2013, and is the sole supposedly intellectual property of its author, Richard Alan Strawser.
© 2014
Posted by Dick Strawser at 12:10 AM