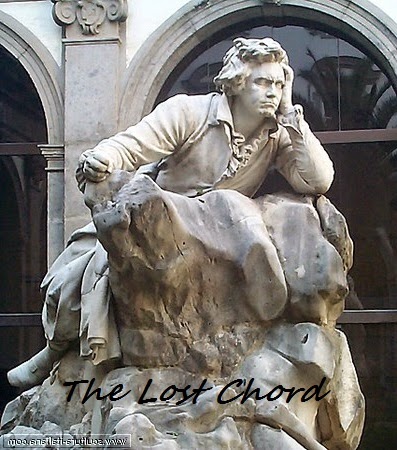 In the previous installment, D'Arcy and Kerr run into LauraLynn in the scene shop and make their escape from the IMPs, reaching a bank of elevators that will take them to the backstage of the opera house. (Meanwhile, elsewhere in Bavaria, an old man prepares for his evening, listening to the conclusion of Mozart's Don Giovanni.) Instead of the elevator doors opening, the walls disappear and Kerr, surrounded by blinding white light, hears the start of the first act finale of Rossini's Barber of Seville. That's when LauraLynn suggests they turn around.

Considering the intensely bright lights, I could barely make out the backs of a line of soldiers and in front of them the back of Cora DiLetto as Rosina, standing dumbfounded next to the even more stunned figure of Dr. Bartolo, immobile, frozen, as unresponsive as a statue.

He’d demanded the militia arrest this soldier, barging drunkenly into his house, bearing official orders to be billeted there. But instead, they inexplicably salute the interloper and bafflingly freeze at attention.

Collapsing into a chair, poor old Bartolo, speechless as well as motionless, now becomes an object of light-hearted amusement for the disguised count (intent on wooing Rosina) and his accomplice, Figaro.

In all, an entrancingly delicate, magical moment, except it didn’t make sense why they’d have their backs to us.

Unofficially suspended in momentary disbelief was Almaviva, his curly fake mustache quivering as if ready to drop off his face, distracted by the unexpected appearance of three characters where they shouldn’t be. And as far as he could remember, characters who shouldn’t be, period.

I thought it best not to wave.

Figaro, wondering what caused the Count’s surprise, glanced over his shoulder just as I realized beyond them were visible the dimly lit faces of an audience, themselves frozen like open-mouthed statues.

Once the backdrop, a panel of doorways, had been completely whisked away, anyone onstage must appear to the audience like the silhouettes of cut-out dolls propped up before a blank wall. In the center, however, there stood three unstatue-like party crashers huddled together, unsuspectingly beamed in from some distant street. One man was wearing a rumpled tuxedo; the woman, thoroughly frazzled, a dove-gray over-the-shoulder sheath dress also considerably disheveled, and some old guy far too casual for such an elegant occasion.

Across the vast auditorium of the Festspielhaus, incredulous opera-goers picked up their lorgnettes or peered quizzically into their opera-glasses: time-travelers from another dimension, a different opera, an episode of Dr. Who? Perhaps, some decided, these were some of those nosy neighbors Figaro mentioned, alarmed about the noise from Bartolo’s house?

We had, apparently, made our unexpected entrance though a kind of “hell-trap” – an appropriate term, especially given our immediate circumstances – an elevator specially designed to deliver large set pieces directly on stage. Once the walls were in place, its ceiling slid away while the floor continued rising until it reached stage-level. Facilitating Don Giovanni’s ill-fated exit or making Mephistopheles’ bold entrance more symbolic, tonight the elevator served an unexpected purpose: placing three strangers behind the front lines of Rossini’s Barber of Seville.

It was impossible, given these blinding lights, to make out who that was I saw offstage to my right, an old man pulling at his hair in gestures of extreme consternation. It looked like the ancient servant Ambrogio was helping prepare a cart that appeared to be… full of pumpkins?

While dozens of techies gathered in the wings, their curiosity greatly aroused, three shadowy figures joined their ranks virtually unnoticed: well-armed, futuristically dressed in black, surreptitiously taking up positions behind the cart.

If we ran in the opposite direction, were more agents, the killer or just house security awaiting us there?

Clearly, our options, already severely limited, were becoming bleaker by the beat in this video game come to life.

Fictitia should have figured a monster that size would have intense stamina, jogging through the woods at a steady pace. She only hoped she could keep up while maintaining a discreet distance. All she needed to do was find out where he was going, who he was, maybe snap another pic.

She heard the wolves howling in the distance while bats flitted overhead – as if things weren’t creepy enough, here. A city girl at heart, she rarely felt comfortable in the countryside.

“OMG, how cool is that? Freakin’ awesome,” she said, catching her breath, staring at the ruins looming before her: an authentic German castle back-lit by a full moon complete with bats.

Hearing a car driving up toward her, she hid herself behind a dense shrub planted near the front door.

Scarpia got out of his car, thinking everything appeared normal. A rendezvous? Then dialing Fictitia’s phone, he waited, hearing nothing.

The front door was unlatched.

That’s when he was confronted by the photo she’d posted on Facebook which then knocked him to the floor.

The last thing Scarpia saw was a massive pair of hairy legs, one of them covered in diaphanous material.

He screamed just as everything went dark.

Agent Gelida-Manina reported to Dispatcher Aida Lott, once they had arrived backstage and ascertained the location of their elusive prey, that there was now a third person with D’Arcy and the professor.

“Is this person the bomber?” she asked. She mentioned someone threw a canister, then yelled “fire in the hole.”

It had been enough of a distraction – not knowing if they had another bomb – and helped facilitate their escape. But they were now in their sites: “Piece o’ cake,” she concluded.

Agent Lott then made a call to the Festspielhaus’ Manager of Operations, requesting a secure room for an interrogation. The arrangements having been completed, she initiated her command center’s emergency move.

Leahy-Hu then escorted Cameron to this otherwise undisclosed location where she would await the inevitable capture of Dr. Kerr.

Like three bewildered deer caught in the headlights, D’Arcy, LauraLynn and I stood mesmerized in the middle of the stage, having unwittingly stolen the show with our wanton lack of costume compliance. If we could sneak across to the far side of the stage without somehow disrupting the performance even further...

It seemed unlikely the IMP agents would open fire on us onstage, right there in front of the audience, not to mention risking some pretty high-priced singers as unfortunate collateral damage.

Listening to the gentle, virtually a cappella ensemble coming to a close, I realized what we needed to do: once the rapid-fire conclusion erupted, we’ll make a dash for the wings.

Now I understood why they called this a stretto, Italian for “stress,” Ambrogio’s unwieldy farm wagon nearly overflowing with pumpkins, the singers dashing around the stage suddenly energized by their collective confusion, and adding to the stress, three agents, rifles poised across their chests, marching onstage and heading right toward us.

Eyes forward, we started crab-walking sideways, heel-toe/heel-toe, edging our way nervously closer to the opposite side of the stage. Unfortunately, two lines of soldiers, stiff as tin, stood in our way.

Maestro Maéstro started waving frantically, the cue for all the soloists to rush from the front of the stage to fan out along the walkway circling the front of the pit. As the wagon lumbered onstage, the old man almost dropped his baton, gripping his chest with his left hand.

Had this been Stage Manager Gottlieb’s idea to liven up the production they had borrowed from the Metropolitan Opera, creating some Eurotrash mash-up with the Three Ladies from Mozart’s Magic Flute?

But there, pacing in the wings, was the equally beleaguered Herr Gottlieb, pulling out what little hair was left.

“My head’s in a furnace,” they sang, “clanking on a huge anvil!”

The finale’s furious clanging reduced them to madness, everything sung to tongue-tying, machine-gun-like patter racing up and down the scales. Ambrogio, ignoring the three IMP agents, started running around in ever-widening circles to alert everyone to some imminent disaster. Not sure he was referring to one the director had in mind or one that was already quickly unfolding, I looked up to see cables cautiously lowering a freaking huge anvil.

When Bertha the maid, near panic, climbed to her shattering high C and he sensed something swinging above them, Agent Leise saw an immense black object, assumed the worst and panicked. Shouting warnings to his comrades, he raised his rifle and leaped back, disabling their attacker with a well-placed bullet.

The anvil tore loose, swaying dangerously overhead like some vast wounded animal. After more shots all perfectly timed to the music, the anvil crashed, shattering the wagon and squashing all its pumpkins.

In the madcap rush at the end, LauraLynn, D’Arcy and I were swept off stage by the fleeing soldiers.

The three IMP agents slipped and fell in what would no doubt have made the world’s largest pumpkin pie.

The curtain descended; the audience, rising to its feet, cheered as one.

The novel, The Lost Chord, is a music appreciation comedy thriller completed in 2013, and is the sole supposedly intellectual property of its author, Richard Alan Strawser.
© 2014
Posted by Dick Strawser at 3:26 PM