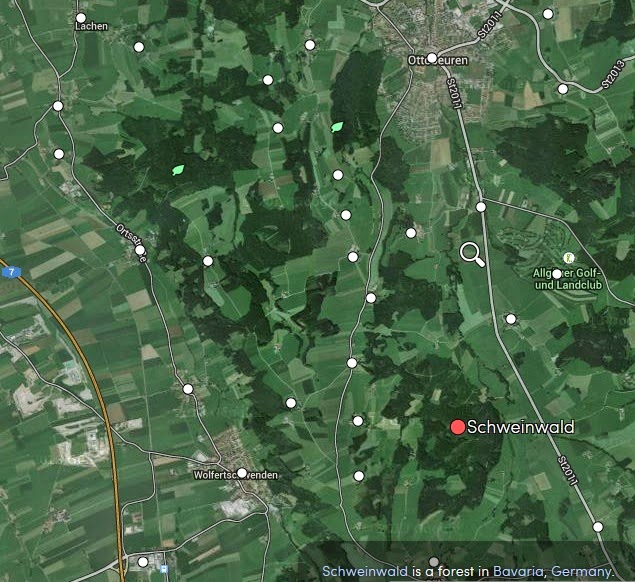 Today's post in the serialization of my novel, The Lost Chord, moves the scene to a place in Germany where the rest of the novel's action takes place: a fictional music festival and opera house in Schweinwald, Bavaria, once the land of the equally fictional aristocrats of the von Falkenstein family.

The name “Schweinwald,” however, is not fictional. It's an actual place-name on the map, a location to the south of Ottobeuren, famous for its beautiful abbey, located in the Bavarian Allgäu.

It is, basically, as its name implies – “wald” being German for woods or forest – what would appear to be the remnants of a forest spreading across this portion of the alpine foothills, perhaps not as famous as the “Vienna Woods” (with its tales) or as large as the “Black Forest” (with or without its cakes). Without any real indication regarding the terrain itself, it seemed a good place to locate a fictional but haunted castle. After all, there are numerous castles in the neighborhood: the much more extroverted Neuschwanstein is basically just down the road.

When I had come up with the name for this location in the early planning stages of my second novel, not long after completing The Doomsday Symphony (much of it set in the purely imaginary parallel universe of Harmonia-IV), the name “Schweinwald” was an obvious choice and my first thought was to locate it somewhere in Austria between Salzburg and Innsbruck. Through the magic of Google Maps, scrolling around, I found an actual reference to an actual place labeled Schweinwald and decided, “okay, then, that's where it takes place!”

I did not want to be too literal, creating such exacting details people could take a “Lost Chord Tour” to visit places described in excruciating detail in the manner of a travelogue. But then, who could avoid referring to one of the nearby farms located on the map called “Fricken”?

For that matter, there was a farm not too far away in the nearby town of Wolfertschwenden called “Falkenhof” which tied in with another set of references, this one for the film, The Maltese Falcon. Not only is the soon-to-be-discovered artifact of a headless bobble-head doll of Mozart referred to as “The Maltese Mozart,” the chief of security for the Schweinwald Festival, founded by the last of the Falkensteins, is named Samuel Schäufel, German for “Sam Spade” (the detective played in the movie by Humphrey Bogart).

If you haven't figured it out by now, there are few names in my novels that aren't references to something else or puns on terms musical or otherwise, everyone from the villain Tr'iTone to the lovely LauraLynn Harty (who, in the third novel, The Labyrinth of Klavdia Klangfarben, gets to marry another comedic pair in her fiancé, Burnson Allan), whose cousin Rob, the murder victim, is the son of Gilbert N. Sullivan. Having already been introduced to the exotic Iobbha Dhabbodhú, you will soon meet the likes of the Director of the International Music Police's Special Forces, Yoda Leahy-Hu.

So, when I decided that a sub-story of this novel would involve a 19th Century music school once attended by LauraLynn's great-grandfather, Harrison Harty (fictional cousin of the real-life composer, Hamilton Harty), set in the Alps catering to budding young composers, one might as well hit the Harry Potter inferences head-on and name the school not Hogwarts but Hogwood, after the Wizard of Early Music, Christopher Hogwood, who founded his ensemble, the Academy of Ancient Music, in 1973.

Setting the story in the Alps, then, translating Hogwood into German changed the school's name to the Schweinwald Academy.

So, it was sad to read of the death of this major force in our musical world a few weeks ago when it was announced that Christopher Hogwood died on September 24th, 2014, at the age of 73.

While there are no specific references to him or his music-making in the creation of his translated namesake, it is, in a round-about way, a tribute to the magic he revealed to us in the many ways music can be played and heard which is all that any of us involved with any amount of passion in the making or re-making of this art can hope for, either composing it, performing it, listening to it or even writing about it whether as a critic or as a novelist of classical music appreciation comedy-thrillers.

And of course the pun was just too delicious to pass up...

Image sources: both maps are from Google Maps; the uncredited photograph of Hogwood conducting was used in a review of the Handel & Haydn Society of Boston by the MIT newspaper, "The Tech," in October, 1995.
Posted by Dick Strawser at 9:38 AM