The Story of Nepomuck and How He Found His Killer Viola

For the past seven weeks, I have been working on another novel, a music appreciation thriller, The Labyrinth of Klavdia Klangfarben, the third in a series starting with The Doomsday Symphony, then The Lost Chord. The 2nd in the series is a complete rewrite of the parody I'd initially written after reading Dan Brown's novel, The Lost Symbol, but I didn't particularly care for it (the original or my parody) but I liked a lot of the details, especially the character names.

Now it came time to revisit the earlier Dan Brown parody, based on his novel, The Da Vinci Code which became The Schoenberg Code. I still like this even as a free parody, but I didn't want to just throw it away, so again, I took elements of it and turned it into a new, original [sic] thriller that is becoming The Labyrinth of Klavdia Klangfarben.

Today, since it's Halloween, I thought I'd give you a preview with two excerpts (expanded from the earlier parody) taken from different chapters that tell a story-within-the-story: how the villain, Nepomuck – or rather, one of the villains, Klavdia Klangfarben being the main villain – found what becomes the murder weapon.

The novel is set on December 16th, 2013, mostly in and around London, but the rest of the plot is immaterial to the following excerpt. Suffice it to say, Nepomuck has just killed his third victim. 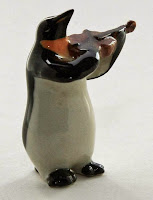 A large balding man in a rumpled overcoat carrying a tattered viola case slid into an isolated booth at the back of a popular Italian restaurant. Nepomuck always liked it here, stopping by regularly, enjoying the menu's endless variety, a place famous for its numerous pasta dishes. He also liked that they played nothing but the finest Italian classical music, mostly Rossini (naturally) but also Vivaldi and Verdi, hardly anything more recent than Puccini's glorious melodies except maybe Respighi's Ancient Airs. 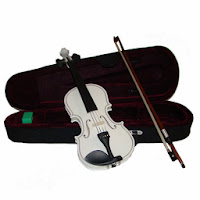 The odd finish, as if it'd been dipped in a white cheese sauce, was without a doubt its most striking feature but not necessarily its worst problem, Stine figured, demonstrating the instrument's 'wolf tone.' This was an acoustical phenomenon that plagued even very fine instruments, he explained, a nasty sound originating from the lower strings.