Tales of Scheherazade: Rimsky-Korsakoff in His Own Words

Thinking of the Harrisburg Symphony’s performance of Nikolai Rimsky-Korsakoff’s popular “Scheherazade” this weekend – part of a concert entitled “Tantalizing Tales” which Stuart Malina conducts this Saturday at 8pm and Sunday at 3pm at the Forum – who better to tell you how the piece came about than the composer himself?

This is an extensive quote from my 1935 edition of Rimsky-Korsakoff’s autobiography, My Musical Life, translated by Judah A. Joffe and published by Tudor Publishing Company, originally published in 1923 by Alfred A. Knopf. I first read this book when I was in 4th grade, considering the first time I had heard the music – or at least themes from it as the background music for a children’s recording telling the story of Sinbad the Sailor – when I was 3.

“Why do you keep playing that record over and over,” my mother asked out of curiosity. “Because I like the music,” I said and continued listening to it for probably the hundredth time. My father asked a friend of his who also played in the Harrisburg Symphony then what exactly this music was and bought me a recording of the piece and eventually this book about its composer.

You could say we have a long history, Rimsky and I…

In the middle of the winter [of 1887-88], engrossed as I was in my work on Prince Igor [an opera his friend Alexander Borodin left unfinished when he died suddenly in 1887 and which Rimsky edited and completed] and other things, I conceived the idea of writing an orchestral composition on the subject of certain episodes from Shekherazada [to use the Russian spelling], as well as an overture on themes of the obikhod [the official collection of liturgical chants for the Russian Orthodox Church]. With these intentions and suitable music sketches, I moved with my entire family, early in the summer, to the estate of Glinka-Mavriny [called] Nyezhgovitsy, some twelve miles beyond Luga [a town about 90 miles south of St. Petersburg], on the Cheryemenyétskoye Lake. My family was increased in January: a daughter, Masha, was born to us.

During the summer of 1888, at Neyzhgovitsy [sic], I finished Shekherazada (in four movements) and The Bright Holiday [the popular name for Easter in Russian], an Easter Overture on themes of the obikhod [this is the work we know as the Russian Easter Overture]. In addition, I wrote for violin and a small orchestra a mazurka on the Polish themes sung by my mother and heard in the Thirties and remembered by her from the time when her father was Governor of Volynia [an area straddling present-day boundaries of Poland and Ukraine]. These themes were familiar to me from infancy and the idea of basing some composition on them had long interested me.

The program I had been guided by in composing Shekherazada consisted of separate, unconnected episodes and pictures from The Arabian Nights, scattered through all four movements of my suite: the sea and Sinbad’s ship, the fantastic narrative of the Prince Kalender, the Prince and the Princess, the Bagdad Festival and the ship dashing against the rock with the bronze rider upon it. The unifying thread consisted of the brief introduction to Movements I, II and IV and the intermezzo in Movement III, written for violin solo and delineating Shekherazada herself as telling her wondrous tales to the stern sultan. The final conclusion of Movement IV serves the same artistic purpose.

[Note: I have often read in program notes where this was not the composer’s intent at all, but in fact merely the idea of a “bard” telling a story accompanied by a harp. Well... uhm... maybe it was?]

In vain do people seek in my suite leading motives linked unbrokenly with ever the same poetic ideas and conceptions. On the contrary, in the majority of cases, all these seeming leitmotivs are nothing but purely musical material or the given motives for symphonic development. These given motives thread and spread over all the movements of the suite, alternating and intertwining each with the other. Appearing as they do each time under different illumination, depicting each time different traits and expressing different modes, the self-same given motives and themes correspond each time to different images, actions and pictures. Thus, for instance, the sharply outlined fanfare motive of the muted trombone and trumpet, which first appears in the Kalender’s Narrative (Movement II) appears afresh in Movement IV, in the delineation of the wrecking ship, though this episode has no connection with the Kalender’s Narrative. The principal theme of the Kalender’s Narrative (B Minor, ¾) and the theme of the Princess in Movement III (B-flat Major, 6/8 clarinet) in altered guise and quick tempo appear as the secondary themes of the Baghdad festival; yet nothing is said in The Arabian Nights about these persons taking part in the festivities. The unison phrase, as though depicting Shekherazada’s stern spouse, at the beginning of the suite appears as a datum, in the Kalender’s Narrative where there cannot, however, be any mention of Sultan Shakhriar. In this manner, developing quite freely the musical data taken as a basis of the composition, I had in view the creation of an orchestral suite in four movements, closely knit by the community of its themes and motives, yet presenting, as it were, a kaleidoscope of fairy-tale images and designs of oriental character – a method that I had to a certain degree made use of in my Skazka (Fairy Tale), the musical data of which are as little distinguishable from the poetic as they are in Shekherazada. 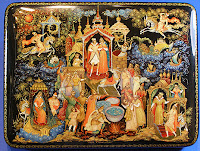 Originally, I had even intended to label Movement I of Shekherazada – Prelude; II – Ballade; III – Adagio; and IV – Finale; but on the advice of Lyadoff and others I had not done so. My aversion for the seeking of a too definite program in my composition led me subsequently (in the new edition) to do away with even those hints of it which had lain in the headings of each movement, like: The Sea; Sinbad’s Ship; the Kalender’s Narrative, etc.

In composing Shekherazada I mean these hints to direct but slightly the hearer’s fancy on the path which my own fancy had travelled, and to leave more minute and particular conceptions to the will and mood of each. All I had desired was that the hearer, if he liked my piece as symphonic music, would carry away the impression that it is beyond doubt an oriental narrative of some numerous and varied fairy-tale wonders and not merely four pieces played one after the other and composed on the basis of themes common to all the four movements. Why then, if that be the case, does my suite bear the name, precisely, of Shekherazada? Because this name and the title The Arabian Nights connote in everybody’s mind the East and fairy-tale wonders; besides, certain details of the music exposition hint at the fact that all of these are various tales of some one person (which happens to be Shekherazada) entertaining her stern husband.

[After a description of the composition of the Russian Easter Overture, he continues,] The Capriccio [Espagnole] [completed the previous summer], Shekherazada and the Easter Overture close this period of my activity, at the end of which my orchestration had reached a considerable degree of virtuosity and bright sonority without Wagner’s influence [he would hear Wagner’s Ring during the 1888-1889 Season], within the limits of the usual make-up of Glinka’s orchestra. These three compositions also show a considerable falling off in the use of contrapuntal devices which is noticeable after Snyegúrochka [“The Snow Maiden”]. The place of the disappearing counterpoint [considered a particularly German academic stylistic feature by the Russian nationalists] is taken by a strong and virtuoso development of every kind of figuration which sustains the technical interest of my compositions. This trend lasted with me for several years longer; but in the orchestration, after [these] works…, there is noticeable a change which I shall speak of in my further narrative.
= = = = = = =

There is little doubt Rimsky-Korsakoff is a better composer than he is a writer – Carl van Vechten’s 1922 introduction begins “Obviously, this book is artlessly, even badly, written in the original, a fact that has made its translation bristle with almost insurmountable difficulties.” Don’t forget, basically, while Rimsky-Korsakoff may have been an amateur writer, initially he was also an amateur composer.

Still, looking back on it when he wrote his autobiography some 18 years later, it gives us an idea of the composer’s own thoughts, not necessarily those of well-meaning people's better written program notes wondering what they hear in the music.


Whatever "The Thousand and One Arabian Nights" may be, it has entertained and inspired people of various cultures ever since it first appeared. A loose collection of tales gathered between the 9th and 14th Centuries from different locations (Baghdad, Cairo, Persia and Syria), curiously the original Arabic versions do not include what we Westerners consider some of its most famous tales, like "Aladdin's Lamp" and "Ali-baba and the 40 Thieves," added into the first European translations starting with the French in the early-1700s. I can find no reference to any "Kalender Prince" that does not begin with Rimsky-Korsakoff's musical setting, yet in some notes about the music, there are apparently three tales concerning such a prince (perhaps that was in a Russian edition of the stories).

Not that it makes any difference, does it?