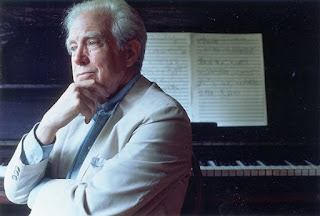 Elliott Carter would have been 104 today.

And while it’s true Beethoven would be 242 coming up on the 16th, Elliott Carter would’ve actually been 104 today if he’d lived a few weeks longer: he died on November 5th, 2012, at the age of 103, just five weeks and a day before his birthday.

Over the years, I have collected numerous scores and recording of Carter’s music and have often thought about getting a copy of David Schiff’s “The Music of Elliott Carter” which everybody points to as “the” book about Carter’s music. The price aside, the main reason I kept putting it off was the fact it was written around the time Carter was turning 70: it seemed a reasonable time for a retrospective, I guess, especially one written by a composer who had studied with him at the time. Who knew he would live another three decades? So I guess I’ve been waiting for an updated version that would include the 40 pieces he wrote between the ages of 90 and 100, and then “over 14 more” composed since he turned 100.

When a composer dies young, we wonder about the possibilities of what has been left unwritten. Yet even at 103, Elliott Carter was still composing and had plans for other new works. Given the productivity of this “Post-Late Period,” I wonder what else we might have had from him?

His last completed work is a set of 12 Short Epigrams for Piano, finished on August 13th, 2012.

While browsing on-line for other books, scores or recordings of Carter’s music, I found a used copy of David Schiff’s book available through Better World Books in Indiana (Mishawaka and Goshen) and it arrived yesterday: I felt like a kid opening a present on Christmas Eve, the book about Elliott Carter arriving on the day before his birthday – or now, officially, his birthday anniversary…

The book, mostly written around the time Carter was turning 70, begins with a brief survey of his life (till then) – including many anecdotes or observations not found in the traditional “and-then-I-wrote” biographical summary.

For instance, this has to go down in the annals of music appreciation anecdotes about unsupportive parents, along with Handel not being allowed contact with musical instruments as a child because his disapproving father didn’t want to distract him from his application to more practical studies in law (but the boy smuggled a small keyboard instrument, probably a clavidchord, into the house’s attic where he would go practice once others in the house had gone to sleep and thus taught himself how to play).

In Carter’s case, his father and grandfather had been lace importers in New York City and he was being groomed at an early age for the international trade, learning to speak French before he could read English. There was little interest in music in the family but Carter, as a student, discovered modern music and preferred it over the standard classics of Mozart, Beethoven and Brahms. As Schiff describes it, the “family’s yearly business trips to Europe allowed him to purchase new scores unavailable in New York” (we’re talking 1920s, here) “ – his favorite composers were Scriabin and Stravinsky.”

It is a well-known story that hearing Stravinsky’s Rite of Spring made him want to become a composer – he heard the New York premiere and, in several live interviews given around his 100th birthday, often told the story one of the things he liked about it was it was strong enough to literally drive people out of the hall: if he could write music that was that powerful, he would be happy. In a sense, Carter’s music has maybe not driven people out of the hall in the droves that the Rite of Spring did, then, but he has never been an easy composer to “like,” for a vast majority of listeners.

But Carter’s parents were not keen on the idea of his becoming a composer.

“[W]hen he bought a piano roll of Stravinsky’s ballet [in the days before recordings were available], his parents sold their player piano, and familial warfare was declared.”

That is only the beginning, apparently.

Though he studied and performed new music with Clifton Furness, a teacher of his at the Horace Mann School which he attended between 1920-1926 (he was 11-17), it was his decision to study in Paris that finally brought down the big familial guns: his father immediately cut his annual allowance down to $500 a year. “The punishment involved sacrifice if not squalor – Carter says his teeth never recovered from those years of neglect. The family, whose fortunes do not seem to have suffered in the Depression, further reduced Carter’s allowance after his return to the States in 1935” (in his mid-20s).

This, however, is the ultimate parental non-supportive slap:

“Friends of the composer say that his parents never attended concerts of his music. His father died in 1955” (the year he completed his Variations for Orchestra, his first major work after the ground-breaking 1st String Quartet); “his mother died in 1970” (the year before his 3rd String Quartet, certainly one of his most complex pieces).

No doubt, holiday dinners with the Carters must have been very chilly.

One thing Schiff mentions in this opening chapter made me think:

= = = = = = =
“When a composer grows up in a cultured musical family he tends to be conservative. The family presents him with the classics of music, takes him to concerts, gives him the best of teachers, prepares him to enter the musical establishment. The young composer is rewarded for imitating the classics, an activity which is often confused with composition. When the family lacks musical culture, however, a young composer can develop without the prejudices of the past. Particularly in American society, where the past is apparently so unimportant and history scarcely seems to exist, it is far more natural for a young composer to be attracted to the latest thing. And if the latest thing offends the parents, so much the better.”
(The Music of Elliott Carter by David Schiff, 1st Edition, p.14)
= = = = = = =

That composers like Bach, Mozart, Beethoven, Schubert or Wagner began their lives in artistically aware families (Wagner’s step-father was an actor and his early background is primarily theatrical), that didn’t stop them from going beyond the musical status quo later in their careers. Certainly, Mendelssohn, who grew up in the lap of luxury, by comparison to most famous composers, never really became a ground-breaking avant-garde composer, but I had always assumed Elliott Carter, the son of a wealthy businessman with a considerable financial fortune, had been a kind of modern-day Mendelssohn, in terms of family wealth and, perhaps, support.

And rather shockingly not so! at that. It amazes me even more that a young boy could continue under such lack of support – in fact, downright “warfare” – from his parents. This goes a long way to explain why Carter was adamant about being his own composer and not caring whether people liked his music or not, as that famous quote I mentioned in a recent post, which refers to a rather epiphanic moment from the 1940s:

“As a young man, I harbored the populist idea of writing for the public. I learned that the public didn’t care. So I decided to write for myself. Since then, people have gotten interested.”

This is not the arrogant “Who Cares if You Listen?” attitude (the unfortunate title some copywriter gave a newspaper article by fellow composer Milton Babbitt) thrown at so many modern artists who appear to deny pleasure to the general audience (the same could be said of Beethoven and his late quartets). It is a more practical realization that, in order to write music that is true to the artist’s creative intent, it needs first to interest the artist.

As used books go, my ‘new’ copy of David Schiff’s book looked brand new: it was a library copy withdrawn from the Unger Memorial Library in Plainview, Texas, and judging from the looks of it had probably never been signed out.

It is a first edition, published in 1983 by Eulenburg Press, and basically ends with the “Night Fantasies” composed in 1980. An updated second edition came out in 1998 in time for his 90th birthday.

Some of my favorite works by Carter have been composed since that first edition:

These, then, are just some of the works he composed after his 90th birthday and therefore were probably not included in Schiff's second edition:

And several recent works that I’ve not heard yet or been able to get recordings of:

As I get ready to reconnect with my composing side (even before I finish the novel, The Lost Chord), I am continuing to sketch out some ideas for a piano quintet which, I suspect, I will dedicate to Elliott Carter’s memory.

I only talked to the man once, as I’ve told the story before, standing on-line for tickets to an all-Carter concert with all three of his string quartets back when he was turning 70. He was very approachable and talked easily and with interest in who I was and when I said I had taught at the University of Connecticut, he said "Then you must know Charles Whittenberg [a composer who also taught there]. He's a very fine composer!" (when I told Charlie that, he was floating on air for a week).

Yet I never had the courage to go up and say hello (not that he would remember me) when I saw him at that concert when the Pacifica Quartet played all five of his string quartets. He was, at the time, two months shy of turning 100 and his assistant, Virgil Blackwell, had escorted Carter into the lobby and sat him down on a bench while he went to pick up the tickets.

There was an immediate hush from everybody around me and when I turned around, I was only a few yards from Elliott Carter, my favorite living composer, soon to be 100! And yet I couldn’t go up and say hello or congratulate him.

Nor could anyone else.

We all stood around in respectful but silent admiration, literally gazing upon him as he sat there, unaware of those around us, unconcerned about being the composer he was in our eyes.

And then Virgil came back, helped Carter up and led him into the hall. He could have been any frail old man coming out to hear a concert.

I feel sad that he is gone, even though he lived to be almost 104. I mean, how amazing is that? And that he wrote all this music since he’d turned 70? But I still wish there had been more time for more music – no 6th Quartet, apparently, alas – but after reading those paragraphs in Schiff’s book about Carter and his parents, what better revenge, if you wanted to think of it that way, to have lived that long and produced that much music, to be regarded as one of the most important living composers of your time?

Like Beethoven’s deafness or Schubert’s health, I wonder how different Carter’s music might have been if his parents had supported him? Perhaps he would be more popular, perhaps he would already have been forgotten.

It is what it is and we have what we have.

And I, for one, am glad at least of that much.