Elliott Carter, On His Passing

Elliott Carter died yesterday afternoon at the age of 103.

So I suppose it shouldn’t have come as such a shock to me when I decided, going to bed after the local 11:00 news (which of course would never mention such an item in all the election hoopla), to check my e-mail and find something there from the publisher, Boosey & Hawkes, announcing his passing.

I haven’t felt this bereft over the death of a living composer since Benjamin Britten died on Dec. 6th, 1976. He had been ill for some time – he had heart surgery postponed so he could complete the opera Death in Venice – and his recovery was not very hopeful. But still, the news came as a shock mostly because, now, I knew there would never be another new work by a composer who had been my favorite living composer.

In the past 36 years since then, Elliott Carter has become my “favorite living composer.” It’s ironic that, with the Britten Centennial coming up a year from this month, Carter attended his Centennial Celebration and in fact had written several new works for the occasion. There was something of an expectation, having made it to 103, he would make it to 104. He was about five weeks shy of his next birthday.

I remember sitting in a friend’s apartment when I was a senior in college and the news on the radio announced the death of Igor Stravinsky. As a student, I was still unfamiliar with a lot of his more recent music beyond the three great ballets which began his career – ironically, the Centennial for the premiere of his most famous work, The Rite of Spring, is also next year. I had been disappointed in many of his neo-classical works in the 1930s and ‘40s, by comparison, and though I liked works like Threni and the “Huxley” Variations, I didn’t quite understand them or their significance in his catalogue of works. I can’t say I grieved after Stravinsky’s death – saddened by it, yes, but it was different. I was not yet 22, Stravinsky was 88 – it seemed such a ripe old, nearly unattainable age – and though I was conscious the man called “the world’s greatest living composer” was not the most popular living composer during his lifetime, certainly not for the works he composed in the last 50-some years of his life, I was aware his death meant a loss for a world that was so important to me.

The one thing that struck me was someone being interviewed – I don’t recall who – was asked in typical interview fashion, “So who do you think is now The World’s Greatest Composer?”

It made me think of a record collection of 12 LPs (if you remember them) which was called “The Music of the World’s Greatest Composers” and which ranged from Bach’s 1st Brandenburg Concerto (1720s) to Stravinsky’s Rite of Spring (1913) which, even in the ‘60s when I was given this for Christmas, seemed to leave a considerable lapse with no representative music from anyone writing in the last fifty years.

Listening to the radio interview, I tried to think who that composer might be who would inherit Stravinsky’s crown. I didn’t know of that many “current” composers – after all, the way most of us discover music is through recordings, going to concerts, listening to broadcasts on the radio or television (at least in those years): the living composers I was most familiar with would have been Britten or Samuel Barber, I guess.

So I was surprised when the respected figure being interviewed said “I would have to guess it would probably be Elliott Carter.”

As I’ve broadened my musical tastes after being able to broaden my musical experience as a more voracious listener, I came to understand why he thought Carter might be considered “The Greatest” though that didn’t necessarily mean “The Best” or, certainly, “The Most Popular.” All of these elements are fairly meaningless and impossible to define: the No. 1 Novel on most lists of Greatest Novels Ever Written (whoever determines these) has usually been James Joyce’s Ulysses though it would never qualify as one of the “Most Often Read Novels.”

But does that mean it can’t be a “Greatest” Novel? Sometimes, the more enduring art is that which is respected more than it is loved. 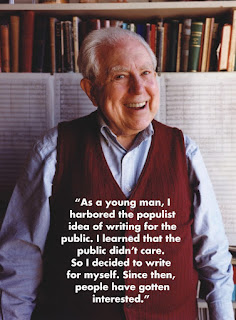 I can’t say I like every piece of music Carter ever wrote but as I became more familiar with it and heard many live performances – I’ve written a great deal, here, about some of these: the string quartets, the world premiere of his recent Clarinet Quintet, for example – I came to understand something behind the music that made it speak to me far deeper than many other composers’ works.

His 1st String Quartet was probably the first work of his I heard that I enjoyed and, after a few hearings, came to love. His concept of space and time – the independence of each instrumental line in terms of both content or character as well as perceived tempo – resonated with me a lot more than many other composers of the day, though stylistically, as I was looking around for my own voice, I would say Britten on the one hand and Messiaen and Penderecki (then still in his more avant-garde ‘70s mode) on other stylistic hands were more significant for my own sound.

But eventually, I found that more and more Carter’s music resonated with me much more deeply, especially after I had a chance to hear the then all-three Carter Quartets in 1979, meeting the composer in front of me at the line for tickets the day before the concert – he was then 70 and was considered to be close to retirement age for a composer. More recently, I’d heard the complete string quartets of Elliott Carter: he had, only a few weeks earlier, turned 99 and written two more. There was hope he might get around to composing a sixth before too much longer...

Unfortunately, the poster at YouTube does not mention which recording he’s using, but if you don’t have time to listen to the whole quartet, listen to the opening few minutes of clip 1, and also the opening 20 seconds of clip 4 which reminds me of a tribute to an early mentor of his, Charles Ives, not to mention a brief “swing” section beginning at 1:31 (which reminds me that Carter, rather than listening to Beethoven, might more often be found hanging out in the jazz clubs in The Village) in addition to the ending, beginning around 5:10.

At the moment, I don’t have the time to write as much as I would like (or could), but whoever inherits the mantel of “World’s Greatest Living Composer” is a moot point, for me, not because by this time I’m now forty years younger than Mr. Carter was, such things are – like the invention of “The Three Bs” – more about marketing than music.

Ironically, I am finishing up a novel in which the villain (Tr’iTone) is trying to find the Fountain of Inspiration so he can become The Greatest Composer Who Ever Lived. One of the characters is an American composer named Howard Zender (the name is a play on E.M. Forster’s novel, Howards End with its famous epigram, “Only connect!”) who is clearly modeled after Elliott Carter (though he is only 90-something, here). In fact, in the original draft of The Lost Chord he was Elliott Carter and I even imitated many of his speech patterns, initially, having listened to numerous interviews of his over the last decade, but then decided it was, perhaps, too much an invasion of privacy to turn him into a novel’s character outright as it might be a misuse of intellectual property absorbing his ideas and his personal sound. (I’m still debating, given the Forster connection, about changing his name to Howard Zenn, especially amusing (to me) considering his music is anything but Zen-like.)

But now, I wish to go compose again, something I have not done for over a year – spending most of it working on this revision of The Lost Chord. In the past, his music inspired me to start composing again in 2000 after a long hiatus and I feel the resonance stirring again (speaking of that lost inner chord).

At the moment, I don’t know how it will surface but I am sure, once again, I will discover that the public, frankly, doesn’t care.

One thing Carter and his music have taught me: write for yourself. By sticking to his convictions and what mattered to him, he has written music that is above all sincere, not meant to appeal to any particular –ism in our very –ismatic society.

And no artist can do more than that.