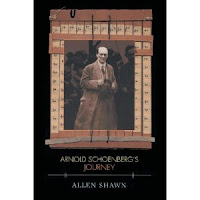 = = = = =
"It has never been the purpose and effect of new art to suppress the old, its predecessor, certainly not to destroy it... The appearance of the new can far better be compared with the flowering of a tree; it is the natural growth of the tree of life. But if there were trees that had an interest in preventing the flowering, then they would surely call it revolution. And conservatives of winter would fight against each spring... Short memory and meager insight suffice to confuse growth with overthrow."
= = = = =

This would have been written for the first edition, published in 1911.

October 16th, 2012, will mark the 100th Anniversary of the world premiere of Schoenberg’s Pierrot Lunaire, one of the first major works defining something new for the 20th Century.

Meanwhile, I’ve been busy writing posts for the opening concerts of the new season for the Harrisburg Symphony – see the posts below for Robert and Clara Schumann as well these posts about Schumann's Rhenish Symphony, Rachmaninoff’s Rhapsody on a Theme of Paganini and Richard Strauss’ Don Juan – and for Market Square Concerts – background information for Mozart’s Quartet K.499 and Beethoven’s “Harp” Quartet (here's the 2nd part) plus one about Witold Lutoslawski and his 1964 String Quartet which the Philharmonia Quartet Berlin will play in between.

It’s fun, writing these – actually, doing the research and combing through material to combine different information that sometimes the average listener may not be aware of in that particular context – and it’s good I enjoy doing this because, frankly, the number of people who read them would be fairly depressing considering the modern American view of judging Art by its ratings.

I’ve also been trying to get caught up on writing my “music appreciation thriller,” The Lost Chord (a revision of an earlier parody which I’d started posting here until I realized no one was reading it), and I’m almost done with the third of its four parts (basically a 180,000 word novel, I have about 40,000 words to go). It doesn’t look like I’m going to participate in this year’s NaNoWriMo because their goal of 50,000 is more than I have left to write for this novel and I don’t want to stop working on Lost Chord to start another one. Even if I manage to finish it before the end of October, there won’t be time to start a new one by the beginning of November, officially National Novel Writing Month’s month to write a 50,000-word novel.

Besides, earlier this year, between April and July, I posted a complete novel, The Doomsday Symphony, on the blog. Not one person told me they were reading it - or have since.

And then I really would like to get back to composing again, something I haven’t done for the past year since I started re-working The Lost Chord last October…

Is it more fulfilling to compose music no one will listen to or a novel that no one will read? Hmmm…

A friend of mine asked me, once, “which is easier,” but it’s not a question of “ease.”

The creation of Art is still hard work – especially considering I’ve spent a year crafting 140,000 words of a novel that’s still unfinished and it took me a year to compose a string quartet which never achieved a second performance.

I would have to admit that writing a novel is more fun.

But music, however, is what fulfills me and I miss having that in my life.