Today is the 2nd Anniversary of the Earthquake in Haiti.

In several posts from those dark days, (you can follow the thread, here) I wrote about trying to find a friend and former student of mine from UConn, Jeanne Pocius, who was teaching in a music school associated with the Holy Trinity Cathedral in Port-au-Prince.

She was there, that day, getting ready for a rehearsal when it struck, the school and the auditorium they were in collapsing around her. As she described it in her account of the quake, “Shaken, Not Stirred: A survivor’s account of the January 12, 2010, Earthquake in Haiti,”

As I stood to pass out papers in the jazz band rehearsal on Tuesday, January 12th, I placed my ZN5 camera/phone next to my calendar on the piano’s music stand.

Suddenly, I heard a low rumble, like an ominous timpani roll.

“Oh, no,” I thought, “they damaged a supporting column in the new construction in the elementary school and it’s coming down.”

That thought lasted all of two or three seconds before the floor began to buckand heave like the surface of the ocean in a hurricane, and I knew we were having an earthquake….

“Run,” I shouted, then had no time for anything else but trying (unsuccessfully) to stay on my feet as the stage tilted sharply, first toward the stage right side of the building, then back toward the back wall of the stage.

I spun in a clock-wise circle and fell to my knees, and, alone with God, curled into a fetal position on my left side.

I felt strangely calm, even as chunks of concrete ceilinger were falling on and all around me and the air was filled with choking dust.

People were screaming and shouting “Jesus” over and over.

The large panels of lights in the ceiling fell down, with upside-down U-shaped sections between them providing the safe havens that preserved our lives on the stage in the front part of the audience.

The official reports first said that this first earthquake arrived at 4:53pm and lasted for 17 seconds, then that was revised to 31 and finally 43 seconds.

But for those of us who survived being inside of buildings that collapsed on and around us, time as we knew it was suspended and the quake seemed to last forever.

All concepts of space and time disappear when solid ground becomes like jello and bucks like an angry stallion!

That is not the end of it. She continues describing finding and helping the children who were her students there, locating friends and hearing news about students and friends and colleagues who had disappeared or were known to be dead, what it was like to be operating and maintaining emergency make-shift medical triage for the wounded from the surrounding community, often being mistaken by a doctor, using tampons and panty-shields to dress wounds, helping save children and trying to help some who could not be saved.

It is, overall, heart-rending to read her account, what she experienced and what she saw around her. But there is a sense of triumph, having overcome one of the most horrible experiences one might imagine, and slowly beginning to rebuild.


It is too easy for us, here, so many miles away, to forget about that afternoon, what it was like those days and weeks and months – and now years – after the catastrophe. Two years have passed and our concerns are onto other stories. 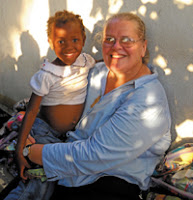 Jeanne continues to bring music and joy to the children of Haiti. She is, no doubt, the bravest person I know and I would gather, judging from her posts on Facebook, one of the happiest despite (or, in a sense many of us could not understand, because of) her experiences.

As we take a few minutes to remember this event, here is a message from the Episcopal Archbishop of the Diocese of Haiti, the Rt. Rev. Jean Zaché Duracin, who, Jeanne says in her post today, “humbly lived on the soccer field at College Ste Pierre with all the rest of us after the quake!”
= = = = = = =