Alexander Scriabin: the Charlie Sheen of His Day 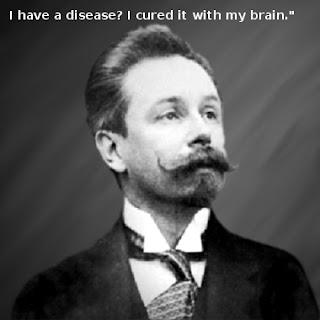 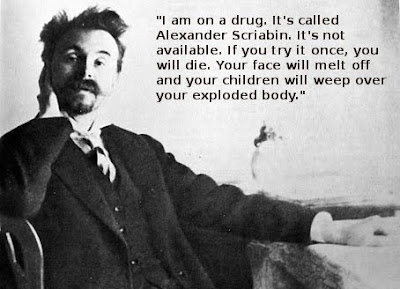 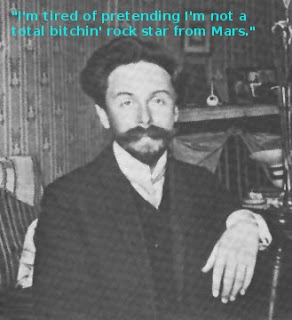 "Scriabin developed his own very personal and abstract mysticism based on the role of the artist in relation to perception and life affirmation. His ideas on reality seem similar to Platonic and Aristotelian theory though much more ethereal and incoherent. The main sources of his philosophical thought can be found in his numerous unpublished notebooks, one in which he famously wrote 'I am God'. As well as jottings there are complex and technical diagrams explaining his metaphysics."

Tiger blood aside, Scriabin was just better at explaining himself than Charlie Sheen -- not that Scriabin's contemporaries didn't have similar reactions to his philosophies and lifestyle choices...

Addendum - Not that I'm equating Scriabin with Charlie Sheen, as friends on Facebook seem to assume - I'm merely pointing out the perceptions of one generation are not necessarily those of future generations, not that that automatically makes Charlie Sheen a candidate for future geniusness.

My solipsistic skepticism, here, is purely to point out the absurdity of those who are constantly trying to engage a younger audience for classical music by bringing in "pop culture references." And this seems more "relevant" than trying to describe Mozart as the Lady GaGa of his day.