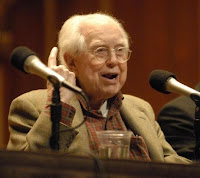 Elliott Carter turns 102 years old, today. His plan had been to attend a celebratory all-Carter concert in Toronto that featured works all composed in 2008-2009 including a world premiere.

According to this article in the Toronto Star, the New Music Concerts ensemble, led by flutist and long-time Carter advocate and collaborator Robert Aitken, Carter was unable to attend the performance but for what reasons, I'm not sure.

Talking with Aitken several weeks ago, the composer had said "If I feel then as well as I feel now, I'll go anywhere!" But many things can happen at this time of year – weather, transportation as well as health issues. (I'm also trying to imagine Carter dealing with the TSA scans and pat-downs...)

This past June, Carter attended the world premiere of his recent song cycle, setting poems of Marianne Moore, "What Are Years?" at the Aldeburgh Festival.

The world premiere in Toronto last night was the Concertino for Bass Clarinet and ensemble, written late last year for his long-time assistant, Virgil Blackwell.

Here is an interview recorded with Carter a month ago – Blackwell is also present for some of it. The production uses a lot of un-Carteresque ambient sound as well as clips of works by other composers who've influenced him as well as tantalizing snippets of his own works plus a kind of time-line where you might hear a bit of a piece Carter wrote in a certain year followed by something from Beckett's "Waiting for Godot" written that same year, or a historical speech or announcement about some major news event.

In all, it's a very good introduction for people who are not familiar with his style, may not in fact like his style but could understand his approach to his music – how he writes it but more importantly how he thinks about it as he's writing it.

Despite its legendary complexity, his music does not start out to be "complicated." As I've tried to explain to people who are put off by the fact you can't tap your toe to it, the "complexity" is a way of approximating what he's hearing – how the instruments, for instance, are expressing their personalities (he often talks about how the players are characters who have ideas and reactions, who may discuss things and who may change their ideas and opinions over time), how these elements overlap in time and how their rhythms interact with each other sometimes by seeming not to interact, the way we normally think of it, but often exist on separate planes simultaneously.

And if you think about it, despite his well-known way of expressing himself which often sounds much like his music – playful, often tangential, sometimes stuttering to find the right word or idea – he doesn't sound bad for a man a month shy of turning 102!

That fact alone is enough for people to take notice of him – "wow, the man's 102 years old, imagine that!" – but the fact he's also busy composing and looking forward to the next piece is also amazing. Since his late-80s, he has become even more prolific than he had been when he was considered on the tail-end of his career after 70.

His earliest music reflected a lot of what was going on around him in New Music before World War II. The "Holiday Overture" and the two ballets "Pocahontas" and (for me, especially) "The Minotaur" as well as his "Symphony No. 1" would all be typical of the American Scene between the wars – sounding like a mix of Copland and Ives, perhaps – but there are lots of fingerprints of the more mature composer already in these works.

After the war, with the Piano Sonata – to me, a work that would fit into any recital program as well as Liszt's monumental sonata – things started taking on a different turn. The Cello Sonata plays off this "time-counterpoint" where the cello is flexible but the piano more rigid and often moving at a different "pace" than the sound of the cello. Also, in one sense, the cello is "romantic," emotional and varied, while the piano is more "classical," stricter sounding and structural, the bones of the piece whereas the cello is the skin, the heart, the soul of the piece.

It wasn't until the First String Quartet that Carter reached his "true voice." This work, composed famously in the isolation of the Arizona desert where the sense of time – an all-important facet of his style – is very different from living in New York City. Not only is it his most expansive work, the quartet flows with an organic quality that is like life itself.

By this time, he was in his early-40s, considered a "late-bloomer" compared to other composers who'd found their voice at a much younger age.

The music he wrote in the '60s and '70s – like the Concerto for Orchestra or the Third Quartet (which is really two duos playing two often different but simultaneous pieces, each duo even playing a different number of movements) – is his most complex and was viewed at the time as "Late Carter." The man, after all was in his mid-60s. Most commentators, looking for a pigeon-hole description, referred to these pieces as his "Late Period," as Beethoven's "Late Quartets" are Beethoven at his most complex.

I met Carter by accident standing on line to get tickets for a performance celebrating his impending 70th Birthday which included all three of the string quartets. He was there to pick up some tickets for friends of his – rather than calling and having them reserved. We talked briefly – when I told him I had been teaching at the University of Connecticut, he said "Oh, UConn – Charlie Whittenberg teaches there. He's a very fine composer." (When I told Charlie that, later – he was always having severe self-esteem issues – I remember him sitting back and sitting up straight with an expression that really struck home with him. I can only hope it helped him in his final years – he died not long after that.)

So the general attitude was, Carter, now 70, would do what most composers do when they reach retirement age – write less, rest on his laurels, and perhaps focus more on teaching or being an Elder Statesman in the New Music World.

But not so with Carter. Since the 1980s, when he was 75, he began a whole new wave of creativity, probably the most prolific period of his life. While many of these may be "miniatures" and solo pieces, there are several concertos, a few large-scale orchestral works, two more string quartets, songs and song-cycles, and, most surprisingly, his first opera, "What's Next?" which he composed for performances during his 90th Birthday celebrations!

Carter's biographical entry at Wikipedia has a partial list of works, of which over 75 were written after he turned 75.

Not many composers have a "Post-Late" Period...

Elliott Carter has long been a favorite composer of mine and his birthday is something I celebrate the way other music-lovers might observe Beethoven's or Mozart's birthdays. Today and over the next few days, I will be listening to several recordings – some of them, with scores – starting with another of my favorite works, his "Variations for Orchestra" – the full score I ordered last week through Barnes & Noble On-Line arrived in the mail just an hour ago, just in time to help me celebrate the composer's 102nd Birthday.

In the next few days, I will try to post some video-clips (the wonder of YouTube) of some of his works, including an exciting performance of his Cello Concerto (written in 2001) by Dane Johansen, a Juilliard student who chose it for his Concerto Competition Diploma, recorded at a dress-rehearsal with the Juilliard Orchestra conducted by a long-time Carter champion, James Levine.

Or this performance by Pierre-Laurent Aimard of a brief solo piano piece, "Catenaires" which Carter composed as one of many works to be premiered during the world-wide celebration of his 100th Birthday.

The vitality of this music is stunning regardless of its complexity – and then when you consider Carter was 92 when he composed the Cello Concerto and 97 when he wrote "Catenaires," it is even more stunning.

- - - -
Photo credit: The header photo of Elliott Carter, which I found unattributed on a few different internet posts, was probably taken during a pre-concert interview, I suspect from the DVD accompanying Naxos' 100th Birthday Celebration disc featuring Robert Aitken and members of the Toronto-based New Music Concerts Ensemble.
Posted by Dick Strawser at 1:20 PM