Off to 'London' This Weekend: Vaughan Williams in Harrisburg

This past weekend was great - I took one of those bus day-trips into New York City which just happened to coincide with the last performance at the Met this season of Alban Berg's Lulu which I'd been blogging about prior to its radio broadcast the week before. Hopefully, I'll get around to writing something about it soon. 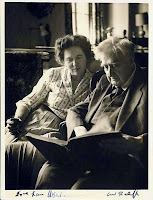 This coming weekend is the final "Masterworks Concert" of the Harrisburg Symphony's current season which features a work that has been a favorite of mine since my days in high school many (many) years ago: "A London Symphony" by Ralph Vaughan Williams.

So I've written two posts over at the Harrisburg Symphony Blog. The first one is about the concert and the symphony itself, including photos and some performance videos, including a quite good one with an All-State High School Orchestra I'm assuming is from Georgia (it's only labeled the GMEA All-State). The second is a more personal recollection of the symphony and how one phrase never fails to bring a tear to my eye.

The concerts are Saturday at 8pm and Sunday at 3pm at the Forum in downtown Harrisburg. Come an hour early to hear Truman Bullard give the pre-concert talk.
Posted by Dick Strawser at 3:09 PM