Beethoven Listens to His Financial Adviser

Now that we’d had our token first frost to make it feel officially like fall, Beethoven sat quietly at the sidewalk café nursing his cup of pumpkin-spice latté with a twist of cinnamon, his eyes glazed over, not too unlike the little pastry he had made the mistake of calling a donut sitting so far untouched on the little plate beside it. He was oblivious to everyone sauntering by in the afternoon’s sunshine, as if watching his 401k drop in ever-downward, slow-motion free-fall like so many autumn leaves.

His train of thought shifted quickly from one sore topic to another. As if the election weren’t bad enough – whom should he vote for: Brahms or Wagner? It was bad enough he’d been getting badgered by both of them for an endorsement – having decided to quit his job as WLVB’s station manager over the current trends in programming classical music on the radio meant he now had no income. That tempting offer he read the other day, the e-mail from some Nigerian general, didn’t sound like it was the wisest thing to invest in, though some other ones who’d been sent to him by total strangers gleefully informed him he could be making tons of money while working from home. But since there weren’t many music jobs around town a composer could apply for, he began thinking perhaps that job as a WalMart greeter might not be so bad... 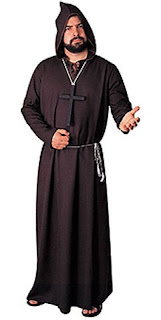 But mostly his thoughts focused on the meeting he’d just had with his financial and spiritual advisor, Brother Ken Yasperidyme [see photo, left], going over all the different points trying to make sense out of the latest crisis in the stock market.

Sure, there had been bad times before – back in 1809 when Napoleon occupied Vienna or the stock market crash in 1873 which had taken a few years before everything got sorted out, something both Brahms and Wagner keep saying but which wasn’t exactly making people feel very comfortable today.

“All they talk about is symphony this versus opera that and Wagner just starts calling Brahms names, bringing up all that old stuff about his having played piano in whore-houses when he was under-aged. Can’t they talk about the real issues, why we listen to music and what great art can do for us in these troubled times?” He always tended to get huffy when he thought about the politics of art.

He was amazed by the government’s so-called Wall Street Bail-Out Plan. He thought the next time some banker turned his nose up at the idea of government funding for the arts, going on about how it was unfair to reward something like art that can’t survive in today’s free-market economy, he would do more than just bop him one across the back of the head.

“I mean, how many people will continue to sit here and drink a $3.50 cup of coffee every afternoon,” he asked himself as he took another sip. He had decided it would be his last little luxury before he would go shopping to find a tighter belt.

“While we basically have nothing to fear but fear itself,” Brother Ken had told him, adding parenthetically (because he too liked to talk in parentheticals) “(if you think Hallowe’en is scary, wait till the last week before Election Day) – the constant fluctuation of the stock market is no reason to panic and pull your money out of your diversified accounts since there’s really no place else safe enough to put them, anyway,” though he was warily eying the substantial new hole being dug out in the front yard, something about trouble with the well but perhaps it was just a metaphor.

“There will,” he continued, “be several rainy days in the weeks and months ahead but you can be sure that, aside from always being darkest before the dawn (if not the coldest), we’ll be able to weather the storm because at the end of the day we can stay on track if we keep everything steady-as-she-goes. You'll just have to hang in there.”

Beethoven tended to nod in agreement for lack of any better response, having not a clue what he was talking about. There was also something about the economic version of the Chinese Butterfly Affect in Chaos Theory: because a homeowner defaults in California, a CEO in New York City decides it’s time to ramp up some million-dollar bonuses before asking the government to bail out his company which then causes Iceland to go bankrupt and so on. Whatever.

“I can write a symphony. I know the ins-and-outs of Sonata-Allegro form. I can even write a fugue, kind of, but frankly I feel like an idiot when people go spouting off about the economy,” he thought, frowning into his coffee. Of course, being deaf didn’t help but he couldn’t blame everything on these new improved hearing aids. (That was another sore point: he had to remember he’s not supposed to put them in the same glass with his dentures overnight. “It’s not easy,” he’d told his doctor last week with a great sigh for the ages, “being a timeless classic at, what, 238 now? People forget there’s more to life than just writing great music.” And soon, he would have to face his family at yet another Thanksgiving Day dinner, as if he needed to see his brother Johann and that good-for-nothing nephew of his again. And again, he frowned.)

The coffee had cooled off too quickly, the flavor a little too “foo-foo” for his liking – he missed the good strong coffee of his first hundred or so years in Vienna. He knew Americans had no idea what a good cup of coffee tasted like. Apparently they felt the more you paid for it, the better it had to be. “So typical,” he sighed, “so typical...”

Beethoven already knew there was a lot of bull involved in the stock market, but these days somehow it was all being eaten by bears. He had this image of large homeless bears running amok on Wall Street, devouring everything in sight. Judging from what he was reading in the papers lately, he assumed a CEO was a company’s “Chief Embezzlement Officer” and that “P/E Ratio” was something about the percentage of investors who were wetting their pants right about now. Why this guy was called a “broker” now began to make sense to him, since that’s how he was feeling day after day: what could you expect when they called it “Standard & Poor”? That was his life in a nutshell, he thought, his cash flow flowing right down the toilet.

He looked up to see a beautiful young woman with long blonde hair and 3-inch heels walking by. As if on cue, she looked at him just as he looked at her. He said to himself, “Hey, baby, how about some piano lessons?” She frowned back at him and walked on. To the world, he was the great Beethoven, composer of some of the greatest music every written - to her, he was just another old man with bad hair in a rumpled suit nursing a cup of coffee at a side-walk café with nothing better to do with his time.

Brother Ken had mentioned “value investing” which seemed to be the art of buying low and selling lower. By the end of the meeting, though, he agreed with him and decided to just ride-it-out, whatever that meant. He kept thinking of the time he and Copland had gone to that bar down the street, the one that used to have one of those bucking bronco machines – what had he called it, Rodeo-in-a-Box? – and how he’d only lasted a few seconds before he found himself on the floor, dusting himself off with great effort afterward.

With any luck, at the end of whatever day it might be, there would still be something left to dust off. He took one last gulp, finishing his coffee, and then sauntered off down the street, pulling his jacket a little closer around him.