The Season Begins: Sunday in Schaefferstown

There are lots of things to talk about as this new season unfolds and I’ll be doing that more here at “Thoughts on a Train,” at least for the duration. And while most of the major series in the area begin next month – the region’s symphonies or presenters like Market Square Concerts – there are concerts this month to make note of.

Concertante, which in the past often began its season right after the Labor Day Weekend, has its first concert scheduled for September 20th at HACC – a program that will include two works for oboe and strings (the Mozart quartet and Benjamin Britten’s Phantasy Quartet), then Brahms G Major String Sextet (Op. 111) – and I’ll be doing the pre-concert talks for their whole season, too. I’ll post more about it later, though I know it’ll be here before we know it (like the warning one sees in your rear-view mirror, “dates on the calendar are closer than they appear”).

What I want to mention today, however, is one coming up this weekend.

Usually, the first performances are in October, giving the artists – whether it’s a chamber ensemble regrouping after a busy summer or an orchestra getting back together after several months away – some time to settle in and begin rehearsing again. Contrary to what many people may think in the audience, it’s not just a matter of picking up an instrument and flat-out playing something for the first time, though the object is to give it that same sense of freshness and discovery no matter how long you’ve been playing it. Hours and hours of individual practice merge into a rehearsal with other musicians, forming a cohesive interpretation which may involve changing a few perceptions – oh, is that how fast it’s supposed to go!? – before putting the finishing polish on everything the day of the concert. 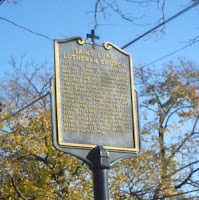 The St. Luke Lutheran Church in Schaefferstown has been offering chamber music concerts on Sunday afternoons for the past nine years. Carl Iba, a busy free-lance violinist, teacher and member of the Harrisburg Symphony - not to mention a good friend of mine these past umpteen years - has been organizing then for several years now, taking over the series from Klement Hambourg who first organized them while he was teaching at Lebanon Valley College.

While the current brochure isn’t yet up on the church’s website, the first concert on the series this Sunday afternoon at 3pm will feature two piano trios by Mozart and Mendelssohn and a delightful (if relatively unknown) piece for cello and piano by Leoš Janáček called "Fairy Tale". In addition to Carl, pianist Christine Diwyk, who’d met when they were in college together, will be returning to the area, joined by the cellist David Bakamjian who’s new to the series this year.

One of my favorite definitions of “chamber music” – chamber, here, originally coming from a word meaning “room” – is “music played by friends for friends.” I first heard Carl and Christine play a recital in the Harrisburg area back in the ‘80s – in fact, I’d made a poster for them and just recently re-discovered it, going through old boxes of stuff here at the house.

When I met her, it was like “I know this person,” but I couldn’t figure out how, when or where we had met. Sure, she lives in New York but so do quite a few other people – musicians, even – so what were the chances?

It wasn’t until later that Carl mentioned her husband’s name, another pianist who’d been an undergraduate at Eastman when I was there. Oh right – now I remember! After living in NYC for two years, I’d run into him outside Alice Tully Hall after a concert, first time I’d seen him since we’d left Eastman! He introduced me to his wife, Christine, and we talked for maybe, oh, five minutes or so. I remember saying that I was going to be leaving NYC shortly, after having been a free-lance starving musician for two years, headed back home. I probably didn’t mention where home was since I wouldn’t expect them to know it (who’d expect her to say, “oh yeah, I have a violinist friend who lives there!”).

When Carl told her how we’d initially met, it cleared up the mystery for her, too: she also thought I was vaguely familiar but had no idea why: then she remembered the line about the “free-lance starving musician.”

To paraphrase something Henry James supposedly wrote somewhere (though probably in 140 words or so), “there just aren’t enough people to go around in the world.”

There’s also a piece of music I’ll be reacquainting myself with. Leoš Janáček’s “Fairy Tale” (Pohadka, in the original Czech) was something I’d discovered, somehow, browsing around through the dusty old Sibley Library at Eastman. My roommate then was soon to end up in the Cleveland Orchestra cello section, so when I discovered this little three-movement piece and showed it to him, he was unfamiliar with it, too. We read through it – it’s not technically difficult: the worst thing about it was being in the key of G-flat Major with a gazillion flats – but it had a certain rustic charm and simple beauty that I, for one, liked. I’m not sure my roommate was keen on it – not very challenging – but we ended up playing it in some lunch-time recital not long after Thanksgiving Day.

The reason I remember the time we played this, we had been making a college-guy’s version of Thanksgiving Dinner which involved our rather cantankerous gas stove. It seems he was about to light the oven when the phone rang, so while he was talking to a friend, I went to light it instead, not realizing he hadn’t turned the gas off, first. In the woof of an explosion that followed, flames shot up my arm, set my shirt to smoldering, singed my beard and, as I ran for the shower, I could even hear my hair burning past my ears. Fortunately, it was not serious, but my right hand was a little more than al dente. Being Thanksgiving, there was nothing open in the way of drug stores to get burn ointment and most of our friends were out-of-town. I spent most of the evening with my fore-arm in a big vat of tea which helped take the sting out of it – we used an old five-quart spaghetti boiler and every tea-bag in the house – so by the end of dinner, my arm had burnished to a nice deep tan.

To keep the fingers supple, I kept practicing and didn’t have any trouble. It just looked weird. But of course, the day of our little performance was the day the old dried skin decided to start peeling. Here I am, in the middle of the performance, brushing flakes of shedding skin off the keys! Too funny... what timing!

Funny, also, the things you remember when you hear a piece of music.

The piece – there were originally five movements but only three were published (you might run into recordings or performances of all five or any combination of them and, possibly, in almost any order) – doesn’t really tell a story in a narrative sense. I had long assumed it was just a piece of music that set the mood of a fairy tale, sort of generically. Or that the original tale had gotten lost somewhere and wasn’t really necessary to enjoy the music.

Well, somewhere I found the story, written down by Vasili Zhukovsky (who published several fairy tale adaptations in early 19th Century Russia), which is a mash-up of several fairy-tale incidents involving shape-changing spirits and the usual inter-incorporeal relationships between Prince Ivan, the son of Tsar Berendey (King Frost) and a princess who’s the daughter of some evil wizard (but of course), probably Kashchei the Deathless (who along with Prince Ivan also appears in another, more famous fairy tale, The Firebird, turned into a ballet by Igor Stravinsky). So yeah, you don’t have to know – much less understand – the story to enjoy the music!

The Mozart Trio (K.502) is a delightful work, full of the spirit of The Marriage of Figaro which was premiered the month after he wrote the trio, and just before he began the “Prague” Symphony. Just to show how little reality can intrude on creative genius, he finished this trio three days after the death of his not quite month old son, Johann Thomas Leopold. One has to keep going, regardless.

Mendelssohn’s trio – they’ll play the less familiar C Minor trio – was dedicated to the great violinist Ludwig Spohr who, next to Paganini, was probably one of the most highly acclaimed performers of the day, playing it a few times together. I’m not sure why Mendelssohn quoted a Lutheran chorale by Martin Luther – “Vor deinen Thron tret ich hiermit,” Before Your Throne I Now Appear – a setting of which Bach was revising at the time of his death. Given Mendelssohn’s associations with Bach’s music, bringing much of it to a public awareness it had long been denied, it might seem a logical idea to include it, though Mendelssohn, then 36, would hardly have been thinking that seriously about death. The fact he died unexpectedly two years later, shortly after the sudden death of his sister Fanny, would have nothing to do with the timing here.

Mendelssohn was born in the Jewish faith. His father later had him and his sister baptized in the official state Lutheran religion so they might not have to experience the more or less official anti-Semitism of Prussian society, not that it helped much. But hearing the chorale in this context – viewing death as a release from life’s pain as something glorious – might imply there was something else going on behind the trio as Mendelssohn composed it, whatever his association might have been with either the melody or the hymn text. It wouldn’t make a lot of sense for a composer to just say “Oh, that’s a nice tune, I’ll stick it here...”

So I hope you’ll be able to join us Sunday afternoon at 3:00 – after Hannah’s rains move out of the area and cools things off a little bit – for some great chamber music at St. Luke Lutheran in beautiful downtown Schaefferstown!

Need directions? Check out this page.

Photo credits:
Top: St. Luke Chamber Music banner from the church website.
Middle: The St. Luke historical marker was taken at a 2006 concert by John Clare and posted at Classically Hip.
Bottom: The cover of a Russian lacquer box featuring different fairy tales as transcribed by Vasili Zhukovsky, though I have no idea if this or any of the others on this box might correspond to what Janáček tells in his music.
Posted by Dick Strawser at 11:49 AM