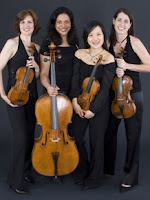 I will be speaking at Gretna Music’s final concert of the classical summer season, Sunday evening at 6:30. The concert, at 7:30 at the Mt. Gretna Playhouse, features the members of the Lark Chamber Artists (see photo, left) joined by pianist Anna Polonsky (see photo, right).

(There have been some changes in my life since the web-site was posted and while the program book is a little vague about things, Ive been assured I really am still doing the talk.)

There are three works on the program: a one-movement string trio by Franz Schubert; the Piano Quartet in G Minor by Mozart; and the rarely-heard Piano Quartet by Ernest Chausson (not to be confused with his less rarely-heard Concerto for Violin, Piano & String Quartet).

Looking over the program, it struck me this is a kind of “young person’s concert,” at least compared to some of the celebrations and observations going on this year – the 50th Anniversary of the death of Ralph Vaughan Williams who (still composing at the time) died at 85 in 1958; the 100th Birthday of Elliott Carter (who is still composing with some new works to be premiered this coming season); the Centennial Anniversary of Olivier Messiaen who died in 1992, still writing at the age of 83.

I’ll be posting more about the works later, but stop by and say hello - and enjoy a great concert.
Posted by Dick Strawser at 10:06 AM