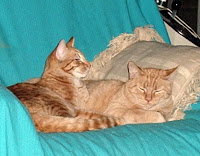 While there are times I wonder if it was wise bringing in a pregnant stray cat (and there have been times, kittens being kittens, that I was convinced it wasn't -- with nodding assent from the Big 3), there were times in the past weeks where there was never any question. Here are three pictures of Kittens at Rest, a rather unusual state and enoyable on all accounts.

At the top is the mother of all kittens, Frieda Farrell, on the right with her son Baker in profile. Though she's no longer officially "feral," she's not exactly the most acclimated of cats: she still won't let me near her (since mid-August, I have only touched her once and that was the second time since I brought her in in April), but she loves to curl up on the one chair, stretch out on a rug, even play around the scratching post. She's not really the Greta Garbo of Cats, either, but at least she's not spitting and hissing at me any more, like she was up until she was spayed.

Meanwhile, on another chair, this one with the red background, are Charlie and, in the foreground, Guy Noir. 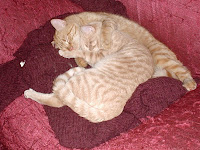 On the gray background, an office desk kind of chair they love because it swivles and rolls around easily, are Abel and Blanche.

With four male tabbies, three of them orange, it's difficult to tell them apart, given the lighting and their positioning.

Guy is the cream tabby (hardly 'noir') who at times is known as Guy Noodge for his incessant kittenish brand of curiosity, usually at times when I am most hoping for the chance to concentrate on composing or reading.

Abel, Baker and Charlie, so named at birth because there was no way of telling them apart then, have developed into distinct personalities. Curiously, I find myself going back to the early pictures and wondering if I had labeled them correctly.

Baker is just a bit more reddish than Abel but 95% of the time, I can't tell them apart without looking at their faces. Each has a V-shaped wedge on each cheek, opening toward the mouth (this would seem to be a standard tabby marking) and Abel has two darker spots inside this wedge. Baker's dots are underneath the wedge. When they're running past you and you want to know who just knocked over the wastebasket, it's tough getting them to sit still long enough so you can check the wedge...

Generally, Baker has the quieter and sometimes sweeter personality. Abel is more out-going and, frankly, more likely to get into mischief. Charlie, the largest of the five, has no white on him (Abel and Baker have white chins), the pinkest nose and lips and a tail on the verge of being fluffy (he also has his mother's curious tail-marking that almost looks like a wound, a zig-shaped Harry-Potteresque configuration, wherein, probably, lies a tale). He's also got the sweetest disposition of the kittens, too, and purrs like an outboard motor. He would make a great dog in the way he always wants to be right next to you: judging from the size of his paws, I'm wondering if he might not be a Lab in disguise...

At the left, helping me blog, are Guy Noir and Charlie.

Blanche (originally as in Guy & Blanche Noir), the smallest of the litter, can be a combination of all the others' personalities. Her expression is usually quizzical, since (being a tortoise-shell and basically a black cat with peeks of orange seeping through and small patches of white on her chest and belly) it's hard to see she actually has a nose and a mouth, just big round eyes.

She also went into heat for the first time the weekend after Thanksgiving, something no one in this household was thankful for. Confining her to the bathroom where she was born, I called the vets and made "the arrangements," setting up the requisit shots-and-bloodwork visit followed by, ten days later, the surgery. She will not be going into heat again. 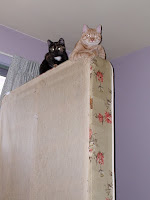 After the move, which finally occured in mid-November (the official unpacking has yet to begin), an old box-spring found its way into the bedroom which the kittens had, before they were left loose in the house, called home. This of course gave them every right to check out everything. Not only does it give them a great vantage point to watch the nests of white-capped sparrows and tufted titmice under the bedroom window, they can also oversee everything else that goes on in their room. 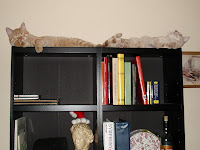 Small wonder I often find myself, walking around the house or sitting at the piano trying to compose, feeling I'm being watched.

The other night, off sick from work, I had curled up on the couch hoping to read a few more pages of Ian McEwan's Atonement (before I probably decide not to see the movie after all), and soon found myself surrounded: Max had draped himself over my left arm, Blanche was in her usual fuzzy bandolier stretched across my chest, making reading impossible, and Guy, Abel and Charlie had heaped themselves next to my right hip, all of us taking up barely a third of the full length of the couch. There was no one who could take the picture for me and no sense in getting up to find the camera.

Oh well, another day and back to work, after I check out what that noise was in the living room....