Into Every Life a Cat Sometimes Falls

Most of the past few days’ energy was taken up by The Cat. Not any of MY cats, but a stray who showed up on my porch Saturday night. Now, there’ve been two orange tabbies I’ve been feeding for months, skittish wild cats born and raised on the streets – Farrell and his lovely sister Frieda – but I haven’t been able to get close to them. My own cats have been eagerly watching them through the door and windows: Max, a stray I’d taken in 4 winters ago; Murphy, a Russian Blue who should’ve been named Kukla, who walked up to me at a neighbor’s and hopped into my arms 11 years ago; and the now-12-year-old Sieti (pronounced c-A-t after a friend who named a dog d-O-g but which he spelled merely “Dog”) who came into the household as a kitten with her mother, Tobie, the recently retired Director of Rodent Control at a York factory, caught by a friend who thought I really needed two more cats. 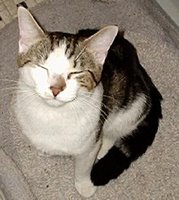 But Saturday night, this guy showed up, clearly not an alley cat, and I decided there was no way I was going to let him out on the street. He came right up to me, wanted to be picked up and petted while Frieda, waiting for her dinner, stood there in absolute shock that any self-respecting cat would DO such a thing!

After checking with neighbors who might know if this was a local pet that had gotten out (they'd never seen it before), I set him up in the bathroom for the night, figuring during the day I would take him on a walk-about (he was so easy to hold) to see if anyone was looking for him or if there were signs posted. On Sunday morning, I woke up, opened up the windows in the apartment including the one in the bathroom, and went to work in the next room where my piano is. In two hours, I’d put the finishing touch on another variation for the first of these Violin & Piano Pieces – now leaving just the two related middle variations – and decided, okay, let’s get The Cat ready for his walk-about.

When I opened the bathroom door, the room was empty.

It’s not a big room even as city apartment bathrooms go so it’s not like he had places to hide. That didn’t stop me from looking in the medicine cabinet (way too small for him even if he could open the door) or the cupboard under the sink. The screen had not been pushed out or lifted up – I figured either somebody opened the screen and let the cat out (or took it) or The Cat is an escape artist and in the two hours he was left alone had figured out how to both raise and lower the screen. I knew he hadn’t gotten into the rest of the apartment somehow because if he had, there would be a lot of spitting and hissing somewhere. Nope, he was gone.

After an hour searching the neighborhood, I figured that was that, though I was concerned cat-nappers may have been going through the area again. That night, coming back from dinner and some errands around 9:00, I looked around the jungulous back yard – no sign of any cats – so I went to unlock the door. By the time I was pulling the screen door closed, there walking behind me was... The Cat.

And of course not telling me where he’d gone or how he’d gotten out in the first place.

I called a neighbor to let her know he was back and we decided he had just earned a name: Houdini. 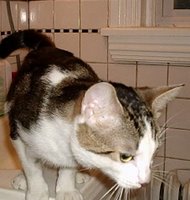 He’s a very nice, pleasant and friendly cat, beautifully marked and well-behaved – an intact male (not for long: he has a visit to the vets scheduled for tomorrow) with claws but he’s very careful with them, even when he’s kneading my lap. He’s a head-bumper and loves to show affection as well as receive it. Until the vet checks him out, he's still confined to the bathroom, but this time I’m not opening the window...